â€œF*@king stupendous,â€ wrote Kerrang! of an explosive live show by Northern Ireland based rock quartet The Answer, about whom theyâ€™ve also said, â€œUplifting and authentic, classic rock is safe in the hands of this brilliant young Irish band.â€
â€œSounds as fresh as any debut album in living memoryâ€ and â€œthe best British rock debut of the decadeâ€ was how they greeted the groupâ€™s first full-length, 2006â€™s Rise, which was released â€“ and met with major success â€“ in the U.K., Australia and Japan. Joining in the chorus of praise, Classic Rock voted The Answer 2005â€™s Best New UK Band at their prestigious annual awards. 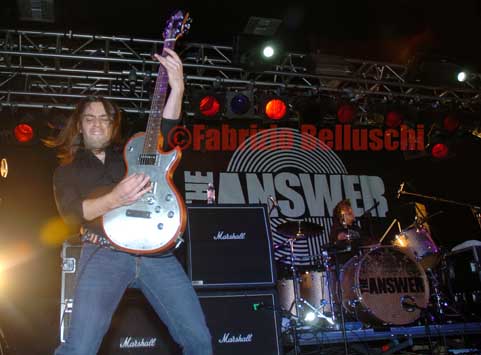 They also ranked Rise â€“ reissued in â€™07 as a 2-CD special edition with a bonus disc of rarities â€“ #3 out of 2006â€™s 50 Best Albums, calling it a, â€œphenomenalâ€¦world class debut that goes a long way to reclaiming Britainâ€™s blues-rock credibility.â€ 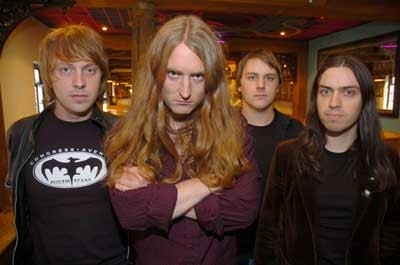 Now as the band head off to America for a couple of months, they have decided to play a last minute intimate show before they go.Â  They will take to the stage NEXT Thursday 16th October in Belfastâ€™s Spring & Airbrake.Â  Tickets are available now from all usual outlets. 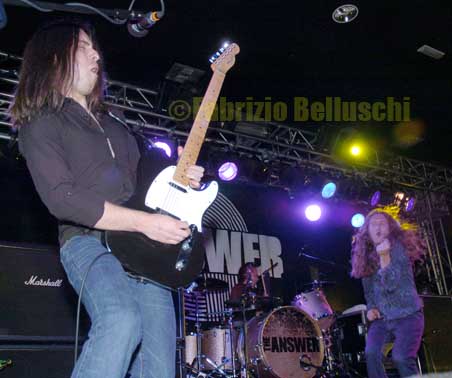 “We are heading off to America for a few months so we wanted to put on a last minute gig for all the good people that have been with The Answer from the beginning. Belfast is where we cut our teeth as a rock band so we will keep coming back to play there any chance we get. We will be playing material off our new record and some of the old songs so it’s gonna be a great night so don’t miss it!”The Answer follows up this heady fanfare with their official introduction to U.S. audiences, 2008â€™s Never Too Late.

The special 3-song EP comprises two studio recordings, including the title track, plus one live cut, and is on the independent label The End Records (with distribution through RED). Also in â€™08, theyâ€™ll be spotlighted on â€œGuitar Hero IV: On The Road/World Tour,â€ the newest installment of Activisionâ€™s massively popular game franchise. Next up will be their second album â€“ and debut U.S. full-length â€“ in first quarter 2009, also on The End. Produced by John Travis (Juliana Theory, Static-X, Killing Heidi, etc.), the disc was tracked at Los Angeles studio Seedy Underbelly in summer â€™08, and mixed by (AC/DCâ€™s latest, Black Ice). Its release will coincide with the bandâ€™s first-ever tour of the States.

Not bad for four country lads from Downpatrick, County Down, about thirty miles outside Belfast who, according to star-powered lead singer Cormac Neeson, â€œspent three or four years playing every shit hole we could findâ€ before getting their start in the U.K. with Australian indie label Albert Productions, famed for the development of rock icons AC/DC. Since then, while they continue to blow the roofs off of clubs across the European continent, theyâ€™ve opened stadium and arena concerts for legendary acts including the Rolling Stones, The Who, Aerosmith, Deep Purple and Whitesnake. The Answer has also triumphantly headlined tours in Japan, Australia and various corners of Europe, East and West.

Neeson has said, â€œweâ€™re just doing what we do: playing every gig like our lives depended on it.â€ They plan to do just that on their inaugural American tour, when theyâ€™ll have the opportunity to connect with a huge audience hungry for a pure, original hard rock outfit that can live up to the giants of the genre. Neeson and mates Paul Mahon (guitar) â€“ who calls America â€œthe bluesâ€™ spiritual homeâ€ â€“ Micky Waters (bass) and James Heatley (drums) will no doubt conquer the new world with their own bluesy, soul strutting, hip-shaking melodic thunder.

Comparisons to iconic predecessors have tripped off the tongues of tastemakers already familiar with The Answerâ€™s music and epic stage might. They also assert that this is the new version of the godsâ€™ musical hammer â€“ â€œThereâ€™s no doubt that The Answer owe a lot to â€™70s rock giants like Free and Led Zeppelin,â€ wrote Kerrang!, â€œbut by endowing every riff and beat with the fulsome power of a 21st century rock band in full, speaker blowing flightâ€¦the likes of [Riseâ€™s] opener â€œUnder The Skyâ€â€¦sound blissfully modern and vital.â€ Classic Rock concurs, noting, â€œyou can hear all of those influences throughout an album that never wavers from the highest standards. But this is a big album. As in taking the roots of the past and planting them firmly in â€™06. This is a big album. As in having a sound that immerses you in the warm glow of a timeless style. This is a big album. As in, the performances are bloody enormous.â€

Acclaim snowballed as The Answer built a fan base and racked up nominations and awards which, in addition to their Classic Rock newcomer trophy, include Best Rock Band and Best Live Event honors at 2007â€™s Big Buzz Awards in Belfast. As their fame has grown, The Answer has never strayed from their passion for the music they make, and from hitting it as hard as they can on every occasion. Arena shows notwithstanding, they still fancy life-size gigs with true believers. Neesonâ€™s recounting of two memorable dates vividly place into context the reality of life for The Answer and the soul of this authentic band:

â€œWe played a homecoming gig in Belfast, just after Rise had first been released,â€ he recalls. â€œWe hadnâ€™t played North Ireland since it came out. It was a 900-capacity venue, and our first-ever sell-out. We taxied to the show, and there was a queue around the block. That had never happened before. In the big room inside, we saw everybody, all the people whoâ€™d been coming since our first gig. It was a great feeling to see the pride in their faces. The evening really belonged to our fans, the ones whoâ€™d been there for the 20 person shows. It was a beautiful night, up there with any large show weâ€™ve done.â€

Of their biggest show to date, opening for the Stones in Belgrade in â€™07 in front of some 80,000 people, Cormac says, â€œThere was a jam at the end of our set, one that lent itself to audience participation. I was faced away from the crowd, and I wondered if they were into it. I brought my head up to look out, and every set of hands was clapping to our music. Weâ€™d won them over. The sun was glowing behind the trees, and I could have dropped my mic and just stayed with it. It was a real lift for the band, the confidence we needed to believe that someday these 80,000 people could be there to see The Answer.â€
Itâ€™s all right now, America. The Answer is coming.