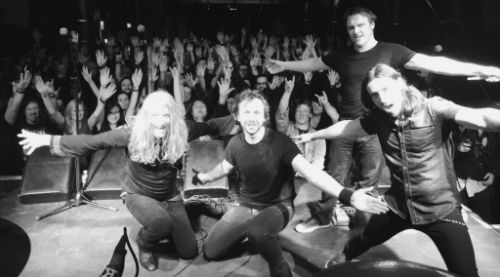 Arguably Northern Ireland’s most successful rock ‘n’ rollers (at least at this moment in time), The Answer have been confirmed for appearances at both the Download and Steelhouse festivals this summer.

After finishing up a typically epic 32-date trek through the UK, Eire and Germany this weekend, the Downpatrick outfit will play alongside Aerosmith, Avenged Sevenfold, Linkin Park, Status Quo, Rob Zombie and many more at Download, which takes place at Donington Park from June 13-15 .

A little over a month later, they travel to Wales to team up with Ricky Warwick and his feloow Black Star Riders – as well as the likes of Europe, The Graveltones, Bernie Marsden and loads more – at the Steelhouse classic rock festival in Ebbw Vale between July 19 – 20.

The Downpatrick quartet release their new single, New Horizon, as a five track digital single bundle will be released on April 7. As well as the title track of their current album, it contains covers of Rory Gallagher’s Cradle Rock and Danzig’s Snakes Of Christ, as well as two new acoustic renditions of Road Less Travelled.