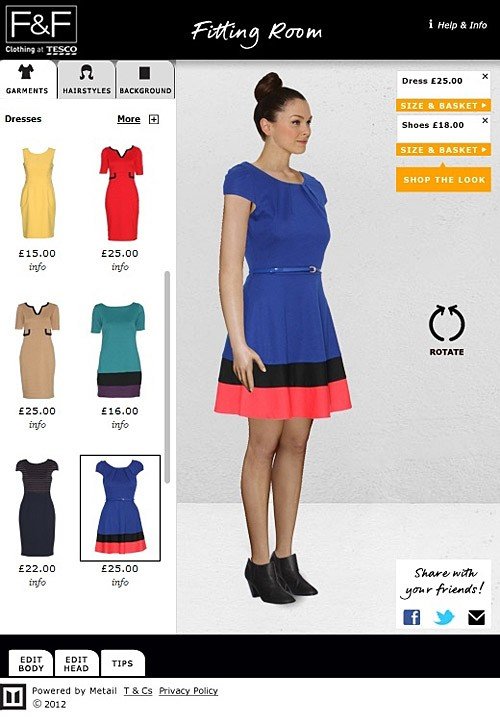 Tesco shoppers will now have the opportunity to try on clothes from their Facebook page without having to queue for fitting rooms.

By simply uploading a picture of themselves onto the Facebook page clothingattesco, users can view chosen articles of clothing and see how they will look on a virtual body designed to look exactly like them.

The process is free, takes just a few minutes and allows you to try on clothing and accessories only from the F&F range.

Emily Shamma, Director of Tesco Clothing Online claims that ‘Although there has been talk about “virtual fitting rooms” before, until now the technology has not been able to combine styling, accurate fit and size based on peoples’ specific measurements.’

The software in question has been created by London-based technology start-up Metail. According to metail.co.uk, the company was started in 2008 and Tesco is the first retailer to use their virtual fitting room.

The software seems to be only available to Facebook users and only in the form of one of those dreaded apps, for reasons not apparent.

It’s also worth noting that Metail also have their own Facebook app which allows users to virtually try on clothing from retailers other from Tesco.

I will add at this point that if you use the F&F app and don’t want Tesco accessing your private Facebook data for their own use, I recommend adjusting your privacy settings.

Links to the apps are available on both metail.co.uk and tescoclothing.co.uk, as well as some images of ‘shared looks’ and F&F fitting room competition winners.

While the realisticness of the models is debatable, this virtual fitting room may prove very helpful for those who would rather avoid the hassle of fitting rooms.

This type of virtual fitting room software has been done before however, and has been used by other retailers, as a quick Google search will confirm, so it’s not exactly as revolutionary as Tesco may want you to believe.

Try it at your own risk, whether as a possible new way of shopping for clothes, or just for fun.
By Fiona Feeney
©FAMEmagazine.co.uk