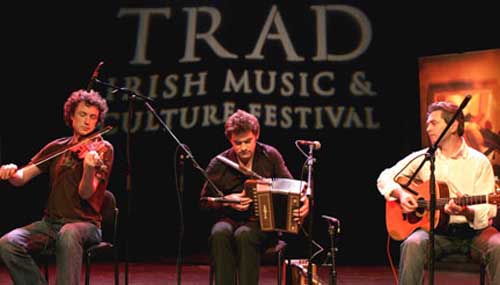 This five day festival is Dublinâ€™s premier celebration of traditional Irish music and culture and will include live concerts, pub sessions, childrenâ€™s events, a festival club, street performances and workshops; all in the heart of Dublin city.

The festival will see many of Irelandâ€™s top traditional musicians and singers performing in Dublinâ€™s Cultural Quarter. During the five days and five nights of the Trad Festival, many of the bars and pubs in Temple Bar will come alive with regular trad and folk music sessions. Over 200 musicians from around the country will play in these sessions over the weekend and admission to these is FREE.

Highlights of the programme include concerts from acclaimed bands At First Light, GrÃ¡da, Clan Ranald and the recently formed Mozaik, featuring DÃ³nal Lunny and Andy Irvine, as well as performances by some outstanding traditional singers from the Irish and Scots Gaelic tradition; RÃ³isÃ­n Elsafty, Susan McKeown, SinÃ©ad Cahir and Julie Fowlis. Not to be forgotten are some of Irelandâ€™s most accomplished instrumentalists; Tommy and SiobhÃ¡n Peoples, Jackie Daly, Niamh NÃ­ Charra, John Wynne & John McEvoy and Breda & Claire Keville.

Performing in Temple Barâ€™s premier venues; Project Arts Centre, The Button Factory and the Olympia Theatre, the festival opens on Wednesday 23 January in Project with a concert featuring Breda & Claire Keville and At First Light. The festival continues until Sunday 27 January with a gala concert in the Olympia Theatre. The impressive line-up for this concert features RÃ³isÃ­n Elsafty, Tommy and SiobhÃ¡n Peoples, Jackie Daly and Mozaik, and the concert will be filmed for broadcast on TG4.

This yearâ€™s Temple Bar Trad has grown to include outdoor and street events and workshops, while the family programme at The Ark, A Cultural Centre for Children is augmented to include a Childrenâ€™s Concert, Storytelling with acclaimed performer Nuala Hayes as well as come & try workshops for all budding musicians with an ear for a jig or a hornpipe.
Featuring the cream of Irish musical talent, with concerts, pub sessions, family events, free street entertainment and a festival club in Project Arts Centre, this dynamic festival is sure to warm the hearths and hearts of Temple Bar this January.

The festival is organised as a non-profit venture by Temple Bar traders group, TASCQ [Traders in the Area Supporting the Cultural Quarter] and is support funded by Diageo under the Bushmills brand, Dublin Tourism and Dublin City Council. Other sponsors and supporters include Temple Bar Cultural Trust, The Clarence Hotel, Blooms Hotel, The Ark, A Cultural Centre for Children, Irish Music Magazine, The Purty Kitchen, The Morgan Hotel and Waltons New School of Music.
Temple BAR TRAD â€™08
from Wednesday 23rd Jan – Sunday 27th Jan
templebartrad.com