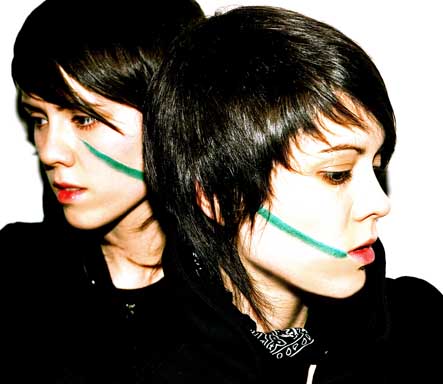 TEGAN AND SARA, in their own words:
the con is the fifth album that we have released as â€œtegan and sara.â€

1. we are born (at the same time, give or take eight minutes). we are raised in calgary, alberta,
canada. fifteen years pass.

2. we find a guitar. we record demo tapes at school and in our bedrooms. we enter a â€œgarage bandâ€
competition (it was the â€˜90s) and we win. we make the yellow tape. we graduate from high school and we make two more demos, â€œthe orange tapeâ€ and the red tape. we play shows and do small tours in canada.

3. tegan and i make under feet like ours in april of 1999. we start to tour more extensively in canada. we eventually send the album to elliot roberts, president of vapor records. we sign a record deal with vapor.

4. we then make this business of art and go on tour in the USA with neil young. after the tour we embark on our first national tour of canada as headliners. we tour with rufus wainwright and melissa ferrick, and make our first attempt at touring europe and japan. we play david letterman.

5. we head back into the studio with john collins of the new pornographers and david carswell of the smugglers in february 2002, to make if it was you. we tour with ryan adams, hot hot heat, and manage to get ourselves to australia for the first time! we tour canada. we play every small, dirty club in the USA.

6. we go back into the studio with JCDC and howard redekopp in february 2004 to make so jealous. we finally sell some records! we get nominated for a juno (canadian grammy). the killers take us on tour all over the USA, and the white stripes cover one of our songs. we buy hummers and do cocaine. just kidding.

7. we release our first dvd, itâ€™s not fun donâ€™t do it. we tour and tour and tour. and after 18 months on the road, we decide to take some real time off. we see the seasons change. we record demos like crazy. we add drums, bass, guitars and keyboards.

8. we meet up with chris walla (death cab for cutie). we give him the demos, and we make a plan to relocate to portland, oregon to record with him at his studio in january 2007.

9. we move into a house in portland. we walk to the studio everyday. we tow our gear behind us in a wagon. we bring angela kendall (who filmed the making of so jealous and the speak slow video) down with us from vancouver to film everything we do.

10. we focus on keeping the songs as close to the demos as possible. after a month weâ€™re finished tracking most of the guitars, keyboards and vocals. we bring in jason mcÂ­gerr from death cab for cutie. he plays drums and passes along life lessons. hunter from afi plays bass on teganâ€™s songs, and matt sharp of the rentals plays bass on mine.

11. we film everything, we develop segments and we gather endless footage. we build a set in our basement and every night for two months we record in-person interviews and speaker phone conversations with our friends and family.

12. march 12 arrives, the album is finished, the movie is ready to be edited. we go home.

13. i arrive in exile. tegan goes to hawaii in search of dog the bounty hunter.