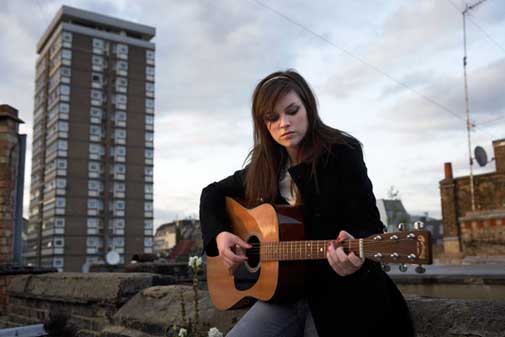 If it weren’t for these artists, Amy Macdonald wouldn’t be the teen-sensation singer-songwriter she is now. She’d still be kicking round Glasgow, an undergraduate at university, studying social sciences with an emphasis on geography. The highlight of her year would continue to be her annual pilgrimage to T In The Park, whereat she and her mates would party under canvas for 48 hours, forget their own names, and maybe see some bands. Amy Macdonald would still be a nobody, instead of a somebody out of whom great songs just flood. Amy was 12 when her world wobbled on its axis. She was on a family outing to Rothesay on Scotland’s west coast. Her gran gave her some money to treat herself. Instead of buying a tenner’s worth of ice-cream she bought a CD: The Man Who by Travis. It was the first album Amy ever owned. She was blown away: simple songs (Driftwood, Why Does It Always Rain On Me?, Writing To Reach You), sung brilliantly, roaring powerfully in her ears and in her head.

Inspired, adolescent Amy picked up one of the guitars her dad had lying round the house. He never played them; he’d never been in a band and had only ‘mucked about’ on the instrument with his pals when he was younger. And Amy just taught herself how to play the thing. There were no genetic influences, nor even lessons. Just a good ear and few chord patterns found on the internet. And a huge, burning, raging desire to write and play songs.

At first she would just play tunes she loved from the radio. Then one day she was sat in her big sister’s room. Big sis was obsessed with Ewan McGregor, and had a wall full of posters of the Trainspotting star. Amy thought about this, and wrote The Wall, ‘about how people idolise stars’. “You never fail to amaze me,” it went, “everything you do is out of the blue…” It was rubbish, but the sentiments displayed a switched-on wisdom beyond her years.

The first song Amy wrote that was any cop was Fade Away. Again, it was her sister’s love of famous people that sparked her imagination – Red Hot Chili Peppers were the culprits this time. By now Amy was in her third year at school (Year Nine in England). A community music group called Impact Arts visited her school. Local musicians, including someone who was in Eighties Scottish pop band The Bluebells (Young At Heart), came to work with kids interested in music. Amy was head and shoulders above her peers, and was soon doing shows round Glasgow organised by the Impact team.

It was just her and her acoustic guitar onstage. She was 15. Mostly she would play her own songs, but chucked in a few covers: Everybody Hurts by REM and Mad World by Tears For Fears Ã ‘but it was the slow version,’ says Amy, ‘the one from Donnie Darko. It wasn’t a single yet, and I never imagined it was gonna be the Christmas Number One. I just loved Jake Gyllenhaal. He’s just the most beautiful thing that’s ever been created.’ Clearly not above a little star-worship herself, Amy later wrote a song about the actor, called LA. It took her five minutes. She’s that into him (and she’s that gifted).

Soon she had a gig in Starbucks in Borders Books in Glasgow. A good reception at their Friday night open-mic spots led to her doing the same at the Edinburgh branch, and landing gigs in Glasgow venues like the Barfly. She started hanging out with other teenage musicians. ‘Me and my pals used to sneak into a pub on Sauchiehall Street on Saturday afternoons when we were 16, so I could play at their acoustic spot. We’d hide at the back till it was my turn. I got a good reception and that egged me on a bit.’

She left school early, having secured places at two universities. She deferred entry for a year and stayed home, writing and playing and reading NME. And going to see Babyshambles. A lot. ‘God knows how many times I’ve seen them,’ she grins. ‘I saw Pete Doherty’s first gig in Glasgow after he left Libertines. It was a great night – he did a little acoustic thing at the aftershow party too, and we got into that. Then me and my pals went back to someone’s house and just sat, passing the guitar round, singing songs. It was a brilliant night. The next morning I wrote This Is The Life about it, cause I realised, this is the life.’

During her year off Amy began sending off demos Ã recorded on eight-track in her bedroom Ã to labels and management companies and talent houses who advertised in the back of NME. After a couple of nibbles of interest she was taken on by Melodramatic Records, a London-based production and management company ran by Pete Wilkinson. He helped Amy, still not yet officially an adult, record better-quality versions of her songs, and he spurred her on creatively. Within six months she’d secured a publishing deal with Warner Chappell and a record deal with Vertigo, home of Razorlight and The Killers.

Last year, with Wilkinson producing in Soho and rock legend Bob Clearmountain mixing in Los Angeles, Amy Macdonald recorded her debut album. It’s brimming with great tunes. As well as This Is The Life there’s Mr Rock & Roll, sung in Amy’s rich, bell-clear, gutsy vocal and possessing a compelling rhythmic punch and a chorus surely set to wow those T In The Park masses. Barrowland Ballroom Ã studded with honky-tonk piano and blaring brass Ã is her fast-paced, skiffling tribute to the iconic Glasgow venue and memories of many a great gig (Razorlight, Babyshambles again, Travis again…).

Footballer’s Wife takes ominous strings, thunderous drums and a haunting vocal and uses them to wallop a pop culture that encourages silly young women (Chantelle, Colleen) to write their autobiographies. ‘They’re only 19, 20 years old or something I don’t know how anybody could write their lifestory at this age. It’s pathetic.’ Ever the patriot, Amy has recorded a version of a modern Scottish folk classic, Caledonia. She’s heard that Paolo Nuttini has sung the song live, but Amy doesn’t care. The song moves her. And that’s all she wants from songs, whether other people’s or ones she’s written herself. That’s what Travis did to her all those years ago, and what on a good night Pete Doherty can do to her now.

It’s no coincidence that one of the most affecting songs on Amy Macdonald’s debut album is the trumpet-laden, atmospheric Let’s Start A Band: a simple song, sung brilliantly, roaring powerfully in her ears and in the head, about how magic it is to love a band, follow a band, be in a band. When you’re a teenager, that’s all that matters.