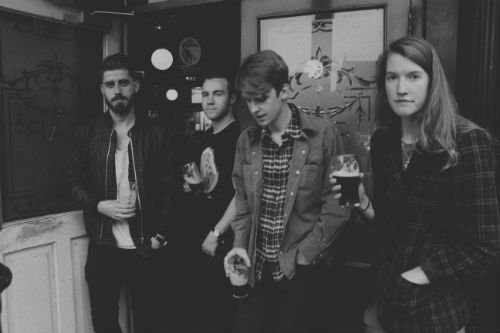 The new EP shows a band that have found their sound, a surprisingly fascinating alloying of “polite and intriguing” psych-rock and modern West Coast vibe. Here’s a slice of their ambitious newfound sound: ‘Nothing I Do Will Ever Be Good Enough’…

How did you form and whats the story behind the band’s name Tandem Felix?

We formed a long time ago when we were still learning to walk/learning French. Then band’s name is a complete mystery. According to a rudimentary search-engine query, it is Latin.

Tell us 3 things we should know about the band?

We’re young, we’re impressionable and we will do absolutely anything you tell us to.

You are a Dublin four-piece band but you sound West-Coast USA…Was it a conscious decision or it just happened naturally?

What should Dublin music sound like? Like most Irish people after the famine, we too look to the “Land of the Free” for guidance. But seriously, I think maybe we’re just watching too much Saved By The Bell.

A lot of Twitter beef seemingly. I wish we could just all get along like we used to. Now that everyone in Dublin has a band, we’ve turned into hooligans.

Can you talk about your EP ‘Comma’?

We spent a lot of time mixing it because I had a very clear idea of how I wanted it to sound. I like using every aspect of music to be able to relay a message and with “Comma”, I wanted the EP to sound like something had been taken away from us. There is little depth or space in these songs, everything sounds close up — intimidating, claustrophobic.

I wrote most of the lyrics to the songs on “Comma” when I was very nervous and was suffering with anxiety. Listening back to the songs now is strange. It’s fortunate for me that we spent so much time making it sound good, otherwise I think I would go mad listening back.

The pedal steel is played by a veteran musician from California called Bobby Lee (maybe that’s why it sounds West-Coast…?). He was this old-school computer programmer from back when PCs ran on Diesel. I met him on the internet and offered to buy him a crate of beer to record some steel guitar on our first record. He did it for free.

What were your influences whilst writing ‘Comma’?

I like how country singers are able to stand still and sing. Something I was always too nervous to do — at our past shows I would inevitably shake my “thang”.

There’s something very engaging about a singer who can face a crowd, eyes wide open, as if they are telling an audience a secret. My inspiration to write a record was based very much on that.

They will be very quiet so that people can talk over us if they like.

How do you sell …. to someone unfamiliar with the sound?

Tell them we’re “country”. It usually scares people off because they think about Tim McGraw.

Right now, I would like to collaborate with my friend Salvatore. He’s a painter and we have been rambling on about this pipe-dream collaboration for over a year now. He is going to paint while I write. It might happen someday.