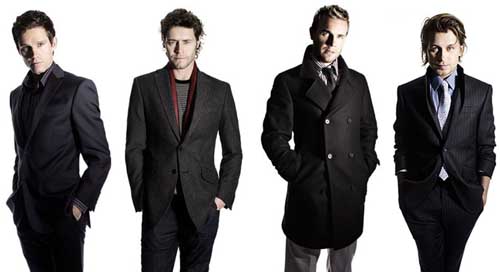 By Andrea Clarke
TAKE That are set to play a whopping five concerts in the Odyssey Arena next week and they are bringing high fashion with them.
The sexy boys, whoâ€™s sold out five-night stint kicks off next Thursday, have signed a multimillion pound deal to model M&S suits.
And although they wore tailored suit by American designer Tom Ford at the Stardust London premiere, M&S assure us that they were in fact wearing M&S pants.
Jason Orange, Mark Owen, Gary Barlow and Howard Donald, who recorded Rule The World for the fantasy film, will step out in style for Belfast fans and here are some of the looks the lads are sporting this season:

Howard’s Smart Casual Look
A stripe t-shirt and indigo jeans are given a smart contemporary twist with a bright polka dot scarf and contrast stitch trainers. The wool twill jacket really pulls the look together.

Gary’s Smart Casual Look
A smart Timothy Everest coat and broken herringbone trousers are given a contemporary twist with a purple stripe shirt and star-patterned silk tie. The stylish wingcap shoes are designed by Jeffrey-West.