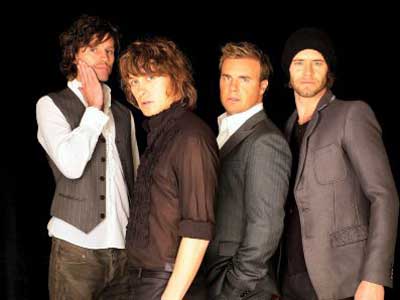 Marks & Spencer signs up No1 band for Autograph menswear
The UKâ€™s favourite male group, Take That, will be unveiled as the new faces of the M&S Autograph Autumn menswear range, the retailer announced today (19 September). The new campaign, shot by iconic photographer Rankin, features Take That wearing a variety of looks from the Collection. The sequence of shots, taken just two weeks ago in a London studio, show the band members, Gary, Howard, Jason and Mark, both individually and as a group.

Speaking about the new campaign Take That said: â€œItâ€™s brilliant to be working with such a strong British brand as M&S and to be the faces for the new Autumn Autograph campaign. We were really impressed with the Plan A eco-initiative that M&S launched in January and the commitments the company has made towards greener retailing. Itâ€™s really important to us to work with people who share our values as well as make great clothes!â€

M&S will also be the official sponsor of the bandâ€™s forthcoming Beautiful World tour. Steven Sharp, Marketing Executive Director, commented: â€œTake That have had a phenomenal twelve months and itâ€™s great to see them doing so well – long may it continue. We are very excited to have them on board especially because of their support for our Plan A work which is at the heart of our business. â€

Suiting prices start from Â£129 for a mainline Autograph jacket and trouser. Timothy Everest suits range from Â£199 to Â£249. The collection will be available from September in 270 stores nation-wide.

The groupâ€™s own stylist Luke Day styled the outfits for the shoot. The advertising agency was Rainey Kelly Campbell Rolfe/Y&R. The ad breaks on 4 October in print and on billboards.
marksandspencer.com