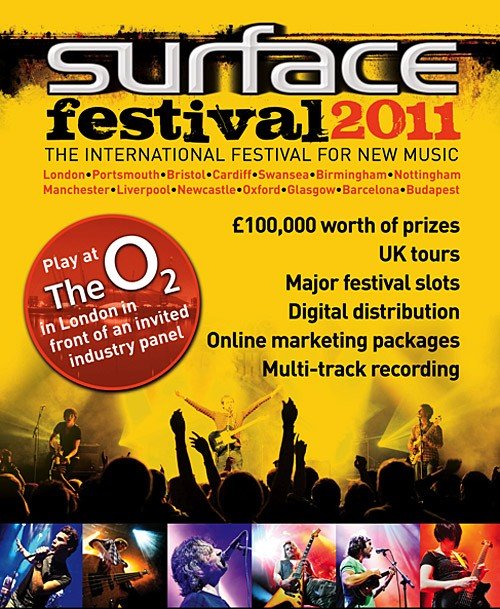 Surface Unsigned Festival is proud to announce that after phenomenal growth and success in the event that it will be rebranded under a new name and image for 2011.

The festival, which in 5 shorts years has grown from humble beginnings in Birmingham into the nationâ€™s biggest national showcase of undiscovered talent, will be moving away from the â€˜Unsignedâ€™ moniker and opening itself up to further talent across the UK, Europe and beyond under the new name: Surface Festival â€“ The International Festival for New Music.

Jay Mitchell, Managing Director of the Surface Festival explains, â€œThe decision to re-launch was driven by bands themselves. More and more bands from small independent record labels and self-releasing bands were enquiring to take part.

Unsigned bands already involved in the Festival commented that they didnâ€™t feel that the word â€˜unsignedâ€™ was relevant in todayâ€™s industry.

Bands arenâ€™t necessarily looking to get signed in a traditional sense anymore and more and more bands are moving away from the restrictions of a record label because they want to do their own thing.

The way bands have driven things has made us rethink the way the festival works. Itâ€™s not about unsigned bands anymore, but about discovering new music.â€

In 2011 the Surface Festival will be staging 500 shows across 14 cities in the UK and Europe. Showcases will take place in London, Portsmouth, Bristol, Cardiff, Swansea, Birmingham, Nottingham, Oxford, Manchester, Liverpool, Newcastle, Glasgow, Barcelona and Budapest.

Sponsors and backers for the newly launched festival include music industry heavyweights such as Marshall, Ashdown, Zildjian, Dâ€™Addario, Tama, Last FM and Shure who are providing a showcase prize pool of over Â£100,000 worth of equipment, tools and support for aspiring new acts to really make a play for the big time!

For more info and to sign up see www.surfacefestival.com