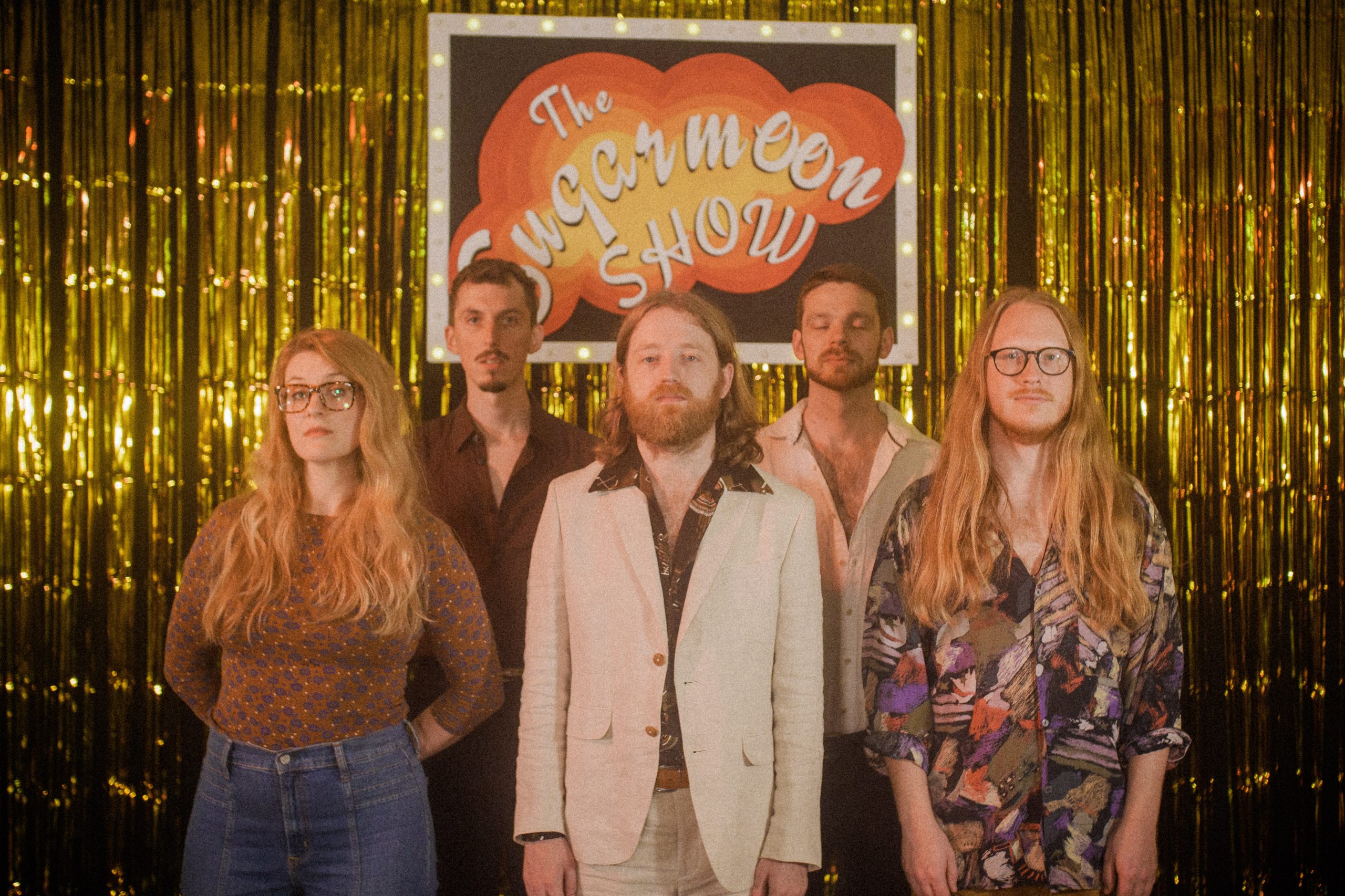 "It's kind of about when you get some advice and support during hard times and bad news, but from someone who is a bit weird and explains themselves in an odd way."

Fans of The Doors, Belle & Sebastian, Mamas & Papas and The Beatles: may we have your attention!

“Welcome to The Sugarmoon Show – a short-lived musical variety TV-series, recently rediscovered and aired for the first time in over 40 years.

The show – created and presented by Bristol-based folk pop aficionados Sugarmoon – was unfortunately canceled after a single episode. It’s hard to understand why. Expect a presenter with more pep than a shook-up Dr Pepper, a dazzlingly gold lamé backdrop and groovy vibes to tend your flower power garden to.

Recorded live at Factory Studios, Bristol, watch the show’s headline act, Sugarmoon, perform their new single ‘Just a Feeling’ to a raucous (and definitely not canned) audience, showing off their incredible live sound in a studio setting.“

The group’s rich blend of blues, rock, folk and pop has graced sold out headline shows in Bristol’s Exchange Basement, and made appearances Swansea Fringe Festival and Inglefest in recent months and earned critical acclaim from a number of music outlets.

Speaking of ‘Just a Feeling‘, lead-man and songwriter Ryan McMurtry says: “This track is kind of about when you get some advice and support during hard times and bad news, but from someone who is a bit weird and explains themselves in an odd way.” Ryan also joined us for a few of our QuickFire Questions, below.

Who exactly is in Sugarmoon and how did you all come together?

There’s five of us – Ryan McMurtry, Sophie Jones, Joe Schutz, Ollie Grant and Dave Martin. Ryan, Joe and Sophie started jamming as friends. We decided to make a band of it, so we found Ollie and Dave on Gumtree, and thankfully they both came to jam with us and were both brilliant. The rest is history!

Ryan: “I think we all have quite varied musical tastes, but all share a love for classic rock, folk, blues and jazz – people like The Mamas & Papas, The Beatles, Dr John and The Band. I think that’s what drives our music – creating that authentic, timeless sound but with a modern twist and also while incorporating all the unique parts of our music tastes.”

Congrats on all your success over the past two years. Did the pandemic affect your musical journey at all?

Ryan: “Massively! We had plenty of live shows and festivals booked in 2020, which all obviously were cancelled. So we shifted focus to recording music and making videos that we would work on from our own houses and discuss over Zoom. It has been tough remaining positive and maintaining creative energy in pretty bleak and worrying times, but I think we were all grateful to have the band to keep our spirits up. And we got way better at recording!”

Ryan: “I guess I’d have to say someone like Paul McCartney! How great would that be? You’d probably get to meet him too, imagine meeting an actual Beatle? I’d probably just get nervous and word vomit at him, so it would be pretty boring for him, but epic for me.”

What can we look forward to next from Sugarmoon?

Ryan: “We’ve got some great shows and festivals coming up in London, Bath and Bristol over the summer. We’ll also have a new EP ready later in the year. We’ve started that one already, so let’s see how long it takes to share with the world. Watch this space!”