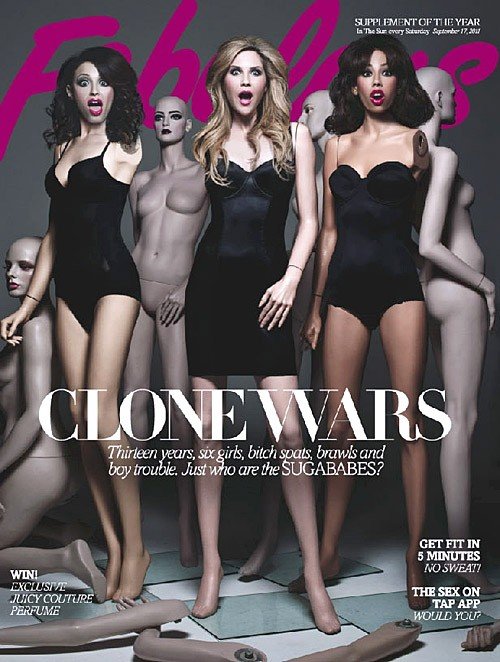 Fabulous magazine super sweet cover stars this week are the gorgeous Sugababes. Their 13 years as controversial chart-topping pop princesses have been characterised by spats, squabbles and the odd headline-grabbing sacking.

But despite not having a single original member in the line-up these days, the girls are back following an extended break and insist they’re stronger than ever.
Longest-serving Babe Heidi Range describes the moment she came face to face with ex-bandmate Keisha Buchanan for the first time since she was kicked out of the band. “There were hugs and tears, but I’ve made my peace,” she said.

And she revealed the moment boyfriend Dave Berry proposed, long after she’d given up hope that he’d ever pop the question. “I was in my Pyjamas and covered in fake tan…it was perfect just the two of us at home when I least expected it.”

Newest member Jade Ewen talks about her break-up with EastEnders star Ricky Norwood for the first time, blaming the couples’ clashing schedules for driving them apart.

She also admits she’s often questioned her decision to join the band given the backlash from Keisha diehards which accompanied her arrival.”Nothing could have prepared me for that…I’ve grown a thicker skin over the last couple of years. I’ve had to.”

And Amelle discusses her recent weight loss, confiding that the stress of life in Britain’s most interchangeable pop band had caused her to pile the pounds on in the first place. “Looking back it’s almost like it happened to someone else. I was so low.”

But she adds that today she’s never felt better. “I feel reinvigorated. I try not to have any regrets…I wouldn’t change a damn thing.”
Except, perhaps, that conviction last week for assault, Amelle…
fabulousmag.co.uk