THE UK’s biggest girl band the Sugababes pushed the button on the all-new Xbox LIVE experience, with a special performance in central London. The pop stars took to the stage to launch the new service which is set to transform the Xbox LIVE experience for millions of entertainment fans with its new look and feel.The chart-topping trio not only rocked the party hosted by TV star George Lamb with an intimate set of new material from the forthcoming album, but they also met their very own ‘avatars’ – totally interactive caricatures of themselves for their online Xbox profiles. 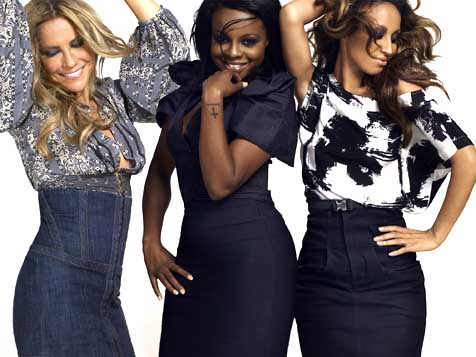 After their performance they took part in a Karaoke performance on new Xbox singing game Lips.
The girls sang Duffy’s hit single Mercy and managed to outscore the Welsh star at her own song.
As the intimate 400 strong crowd stood in awe â€“ the girls pulled off an overwhelming game score of over 1.2 million points and 152 â€˜medalsâ€™ â€“ nearly double the score that Duffy racked up when she performed the same song at E3, the gaming conference in Los Angeles earlier this year.
Keisha said: â€œIt was great fun! Itâ€™s certainly something a little different for us to sing someone elseâ€™s song like that, and the three of us were getting a bit competitive on stage trying to score the most points which was hilarious.
“Weâ€™ve been enjoying playing Lips since we first got it and with the music, movies and other entertainment on the New Xbox Experience we think it’s great that more people can now enjoy all this entertainment whether theyâ€™re into gaming or not.â€
Amelle added: “As massive music and movie fans, we were keen to get involved when we heard about the New Xbox Experience, and when we first tried out Lips last week you couldn’t get us off it!”
The new Xbox Experience is out now.
More information can be found online at xbox.com/nxe