Rascal, internationally called “The Ugliest Dog Alive,” is a 6.5-lb naturally hairless critter, born without his teeth, so his tongue hangs out, and is actually an African Sand Dog owned by actor Dane Andrew of Sunnyvale, Calif.

Rascal has beat his own record again by winning more ugly dog contests than any dog in history, 10 that is.

Rascal was undefeated in his last 4 championships, winning every different ugly dog contest ever entered, some for a second year in a row.

Rascal recently won huge at the major Del Mar ugly dog competition, is the current 2nd-year-in-a-row winner both at the Highland and Fort Bragg ugly dog contests, and now just won top honors at the first annual Oroville Ugly & Beautiful contest, after which he donated all winnings to local shelters and led their parade with the Grand Marshal group. 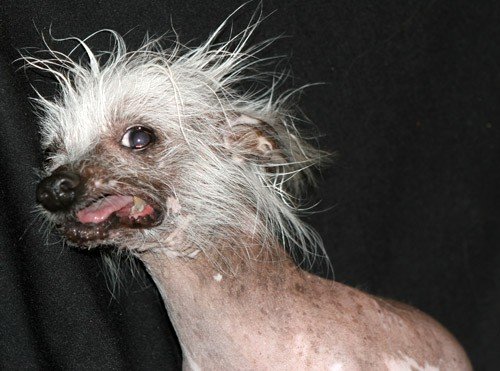 Dane and Rascal were named “Distinguished Residents” at The Mayor’s State of the City, and have a Star on the “Walk of Fame” in Palm Springs, California.

— Rascal is “Ugly Dog Royalty,” from a 4-dog dynasty of winning ugly,
with his mom, grandmother, and grandfather, all who have held the
title of “The World’s Ugliest Dog.” Rascal’s Grandfather “Chi Chi” is
in the Guinness Book of World Records for winning 8 Ugliest World
Titles.
— Master Dane Andrew set his own record showing “ugly dogs” for 33
years.
— Rascal has 2 Mayoral Proclamations from Sunnyvale and San Francisco’s
Mayor Gavin Newsom, totaling of 4 proclamations in the Ugly Dynasty.
— Named official Fire Dog of Station #1 in Newark, Calif.
— Received Honorary Doctorate in Animal Magnetism from SSU.
— Walked catwalk during fashion week for Desert Guide Dogs.

Sometimes called a Chupracabra, Space Alien or Batdog, the Dog Wonder was officially proclaimed Batdog by Batman himself, Adam West, at his recent “Walk of Stars” dedication.

Rascal is so ugly he was on Jay Leno’s Tonight Show before he even entered a contest and interviewed by Barbara Walters on The View. He has also appeared on The Jane Pauley Show, Last Call with Carson Daly, 5 Animal Planet shows, Kathy Griffin’s My Life on the D-List, 2 ET Insiders and numerous other TV shows and magazines. He has been cast in 5 horror movies, appeared in the celebrity-filled documentary “The Ugliest Dog,” and featured in a cartoon strip by the same name. He is listed as an actor on www.imdb.com – and he’s a dog.

Rascal, who lives with rescue kitties twice his size, spreads his message through his notoriety for people to spay, neuter, adopt instead of breeding and donate to your local shelter, especially the smaller no-kill rescues – after all, Rascal would not be here if not for rescue.
www.ugliestdogalive.com