After months of speculation, BBC finally announce the line-up of the 14 celebrities who will be competing in this year’s Strictly Come Dancing. 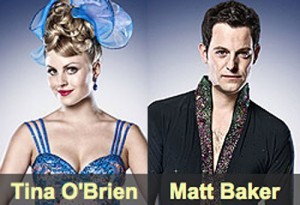 She is well-known for happily voicing her outspoken views on controversial issues, and is fiercely anti-abortion and pro-capital punishment.

As a committed Christian, she is “not interested in being sexy” – so getting to grips with the raunchy Rumba and perfecting a sultry Samba should be something of a challenge…

Well-groomed Gavin Henson is a Rugby sensation, bagging Grand Slam victories for Wales in 2005 and 2008.

He has played a variety of positions, including fly-half, fullback and inside centre.

He’s frequently in the press for both his injuries and his private life – particularly his 5-year relationship with singer Charlotte Church.

Animal lover Goldie, who’s named after his penchant for expensive dental work, is a well-known DJ, electronic music artist and visual artist who shares his home with a giant boa constrictor, amongst other pets.

In recent years, Goldie’s turned his hand to acting and has enjoyed success in high profile projects including EastEnders and the Bond film The World is Not Enough. He’s also appeared as himself in the reality series Celebrity Big Brother and Maestro.

Voted ‘Sexiest Actress’ at the 2008 British Soap Awards, it’s little surprise that she stole the heart of not one, but two of her EastEnders co-stars and bagged plenty of tabloid column inches during her high-profile relationships with James Alexandrou and Joe Swash.

Now happily single, Tara’s likely to sizzle on the Strictly dance floor. But will the Rumba lead to romance?

Child star Patsy Kensit has been in show business since the tender age of four. She’s appeared in Hollywood blockbusters and was notably the face of the ’90s Britpop scene alongside her then-husband, rock star Liam Gallagher.

These days Patsy Â is best-known as a sex symbol of the small screen, and has been wowing viewers of Emmerdale and Holby City.

Her private life has been as well documented as her career, but she sees herself first and foremost as a mother to her sons James and Lennon. She hopes that by appearing on Strictly Come Dancing she will make her boys proud.

As a hard working single mother, life’s not always easy for this 27-year-old, but being put through her paces live in front of the Strictly Come Dancing judges and the British public is likely to be her toughest role to date.

All couples will have just three weeks to prepare themselves for the first LIVE shows on Friday 1st and Saturday 2nd October.
www.bbc.co.uk/strictlycomedancing