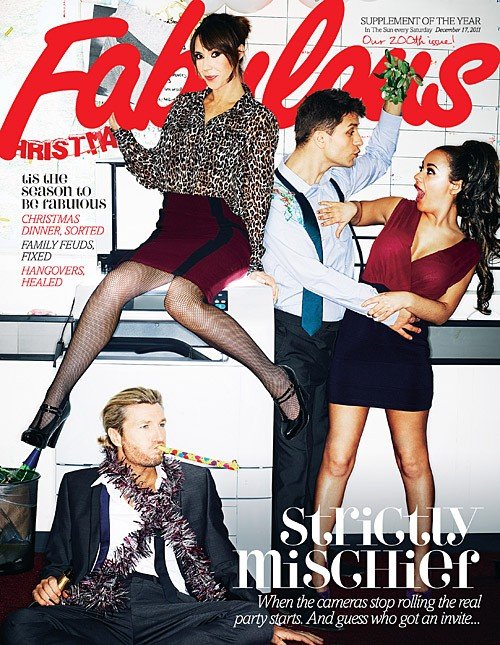 It’s nearly Christmas, so Saturday’s Sun Fabulous magazine has been getting festive with the Strictly Come Dancing gang.

And under the mistletoe, we had a good old gossip with the celebs and their partners. Chelsee Healey reveals the truth behind the rumours about her and Celebrity Big Brother star Lucien, “Nothing… me and Lucien are friends, good friends”, but she confesses she was hoping for a Christmas romance: “I’m a bit gutted. I was hoping for some fittie to get in touch, but no.”

When Fabulous asked if it was a member of JLS she replied, “How do you know that?” However, Chelsee says she has her eye on One Direction’s Zayn Malik: “He makes me melt, but he’s supposedly got a girlfriend. My heart broke when I read that.”

Fabulous asked ex-footballer Robbie Savage what he would buy the judges for Christmas, “I’d buy Craig a balaclava, so I didn’t have to see his face;” and Holly Valance revealed who she would like to kiss under the mistletoe: “Probably Tess, she is hot!”

Lulu, despite being a performer herself, failed to impress the judges and Brendan reveals why: “It definitely wasn’t because I was too tall, she just couldn’t remember the choreography”.

That told her! And could there be a Strictly baby on the cards? Ola and husband James Jordan revealed: “Definitely, we’re practising a lot! If we’re not back next year, it’ll hopefully be because we’ve got a baby.” How exciting!

To read the full interview pick up your copy in this Saturday’s Sun. fabulousmag.co.uk