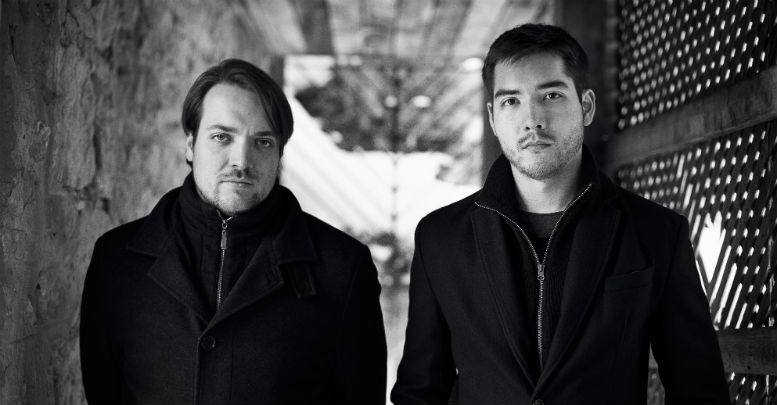 Hello Strange & Primitive! Who are you and where are you from?

Jeff: Strange & Primitive is an independent Canadian musical duo formed of myself (Jeff Musgrave) and Graham Fish. I was born in Osaka, Japan, and raised in various cities in British Columbia, Canada. We met in 2007 while I was at school in Guelph. While I provide all the vocals, all other tasks, such as writing, recording, and producing, are split between the two of us. Either one of us just sort of fills whatever gap is needed at the time.

Graham: I’m from Guelph, Ontario where we met, which is also home to our studio, but I live in Toronto now.


Why the name Strange & Primitive?

Jeff: When we started working together we were just making instrumental music under the name Audiograft for which we released an album in 2012 called ‘Melody in the Half-Light’. After that release we really wanted to try adding vocals to our sound and it became clear that this new project was significantly different in sound and structure so a name change seemed necessary. Choosing a name for the whole project the previous time was very hard so we thought we’d target something easier like just choosing a title for our album. Strange & Primitive came up in those discussions and we liked it immediately.

Graham: The name to us has since come to represent our sound but also a way of describing music. Music is this old/primitive form of communication where the strange, abstract and otherwise incommunicable ideas we have can be shared to each other.

Jeff: Since both my parents were trained classical pianists, I had a lot of classical music and a bit of jazz in my life growing up. My mom also had albums by Stevie Wonder and Steely Dan around that I was exposed to and still enjoy. While my initial contact with the contemporary music of the time came in the form of a clock radio during grade school, what really broadened my horizons were some of the soundtracks from the computer games I played as a kid. The wildly different elements of production and composition I heard were what lead me to discover bands like Nine Inch Nails, Radiohead, and Boards of Canada in high school, and later many other bands that would form compositional and aesthetic common ground for us to work from.

Graham: I think film is a big influence on us in that we want to recreate that cinematic atmosphere with dynamic transitions when we can. My musical tastes sort of reflect that desire for the cinematic as well since I loved albums where you’d really feel you went somewhere. So I was drawn mostly to stuff like Pink Floyd, Peter Gabriel, Radiohead, David Bowie, King Crimson, Talk Talk, Brian Eno, Daniel Lanois, Talking Heads and also jazz artists like Bill Frisell, Dave Douglas, Brad Mehldau and Kurt Rosenwinkel. Later, artists who were atmospheric and maybe more lyrical like Tom Waits, Nick Cave and Nick Drake were influences. Lately, I’ve been enjoying Wye Oak and Grizzly Bear.

Jeff: Graham actually introduced me to a lot of the music he mentioned above in the first few years we worked together.

There’s an 80s feel to the album, would you say that era had an effect on you?

Graham: There are certainly artists from the 80s, for instance Talk Talk, that inspire us but some of the more synthetically atmospheric films of the 80’s I think are often in the back of our mind. Maybe I’m just thinking of Blade Runner right now and hearing glorious Vangelis. I really wish we could write music for a noirish science fiction film.

Jeff: Yeah, we really liked the haunting sounds that Vangelis produced with synths like the Yamaha CS-80, so we did our best to squeeze them into whatever songs we could.

Is there a story behind the album or any of the tracks?

Graham: Each song on the album came from a different place but thematically after we had finished, it sort of dawned on us that we had been writing songs about communication, misunderstanding and misidentification.

Jeff: Inspiration for lyrics on this album came from subjects like 50s Las Vegas, neuroscience, artificial intelligence, Victorian exploration and discovery, and early Hollywood Western filmmaking. However, as Graham said though, underneath those settings we were writing about similar themes.

What’s the best thing about the Canadian music scene and are there any bands we should watch out for?

Graham: We are hardly experts but I believe (pushed by a little by patriotism) that the Canadian music scene is very open to artistic experimentation and generally celebrates new sounds.

Jeff: We really like the ambient works of Canadian artist Loscil and would highly recommend.

Your animated video for ‘Difficulties Be Damned’ is excellent, tell us more about it.

Jeff: After just completing a claymation music video for ‘Eureka’ it wasn’t our intention that we’d go with another animation. We had a rough concept that would parallel the song’s themes and we realized quickly that animation was the way to go again. We spent days watching animated shorts from Canadian artists looking for someone who’s work naturally possessed some of the themes. We found Malcolm Sutherland who does really awesome work. We reached out to him and were ecstatic when he wanted to direct and animate the video. He took our rough concept and really made it his own, creating something visceral and mysterious. We’re really excited and happy about it.

Graham: Yeah I think you can really sense a larger mythology and universe at work when watching the video.

What’s the best and worst thing about being an independent band in 2016?

Graham: We can’t speak for everyone but for us having practically complete artistic freedom is such a boon. We’re able to create what we want and collaborate with the people we want to work with. I imagine it’s probably easier to work with us as well since it’s just the two of us calling the shots. For instance, I think collaborating with Malcolm Sutherland for ‘Difficulties Be Damned’ was a smooth and rewarding process since it was just the three of us having those conversations.

Jeff: We might be more independent in our freedom than many others as well since we have our own studio space to work within and our efforts aren’t limited by time. On the flip side we’re wholly responsible for both our creative work and the management of the band. Getting out there and standing out among a crowd can be difficult. Those are challenges that will just push us further though.

What has been the best thing that’s happened to you since being in Strange & Primitive?

Graham: As Jeff just mentioned, having that studio space to create together in complete independence has been not just one of the best things for Strange & Primitive but for my life. Also finally getting this chance to share some of our music with people and then getting positive feedback and hearing what they’re getting out of it is really interesting and rewarding.

Jeff: Since starting this project it’s definitely added a degree of focus to my life that wasn’t present before since it’s forced us to really push ourselves in all avenues of music composition and sound design.

If you could have one wish for the band, what would that be and why?

Jeff: After wishing for more wishes, our first wish would be that a year from now we have another album out and a real reputation for making great music and cinematic videos to go along with them. We’ve got a swarm of video content planned and there’s a lot we want to share with our audience. We’ve had some ups and downs health wise so we’d really love to get a strong bill of health and sneak out from under the radar.