Stiff Little Fingers return to Belfast following on from last spring’s Ulster Hall sold out appearance, since immortalised as part of the Don Lett’s produced Still Burning DVD. With the Ulster Hall closed for refurbishment through 2008, the band return to another stomping ground of old, Queen’s University’s Mandela Hall, known – appropriately enough – as The McMordie Hall back in the day.

The band recorded a seminal tv broadcast for the BBC there in January 1981, on the same weekend that an emerging U2 did the same.

Jake Burns formed Stiff Little Fingers after seeing the Clash play in his hometown Belfast, releasing the classic Suspect Deviceâ€š and
Alternative Ulsterâ€š singles, and going on to become the first band ever to hit the UK top 20 album charts on an independent label – with their 1979 debut Inflammable Material. 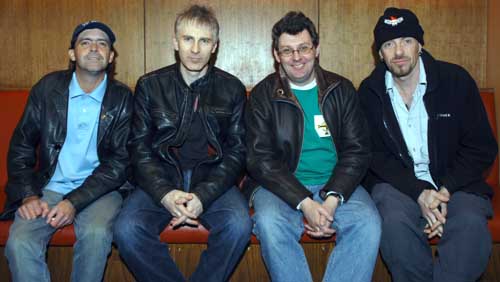 Stiff Little Fingers were at the forefront of the punk movement, enjoying six successful years in the UK and further afield, and recorded three more studio albums Nobody’s Heroesâ€š (1980), Go For Itâ€š (1982) and Now Thenâ€š (1982) – before Jake Burns took a sabbatical to work as a BBC Radio One Producer.

SLF reformed in 1987 playing bigger shows than ever, including two sold out Brixton Academy gigs, which persuaded Jake to make the reunion permanent. When original bassist Ali McMordie bowed out in 1990, just as SLF were about to tour Japan, former Jam bassist Bruce Foxton jumped in at the last moment and was with the the band for 15 years, playing on the group’s five subsequent studio albums. Foxton has since moved on, with McMordie now back in the fold.