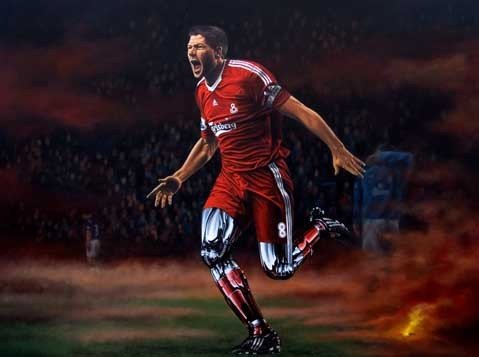 Artist Lee Jones has depicted Liverpool Captain and England footballer Steven Gerrard MBE for his Beyond Human series of elite sport superstars. Jones has captured the moment after one of Gerrard’s breathtaking goals, the electrifying atmosphere of the stadium filling the canvas.

Gerrard’s jubilant expression and powerful limbs are depicted in a hyper real style by Jones, who has given Gerrard Terminator-style legs and metallic boots to symbolise the athletic prowess of this World class midfielder. Liverpool Manager Rafael Benitez has hotly tipped Gerrard as the PFA Player of the year, and his recent hat trick against Aston Villa has made that an increasing possibility.

Gerrard’s performance this season has been pure dynamite, with 21 goals scored so far, and Jones has translated this into an explosive painting. 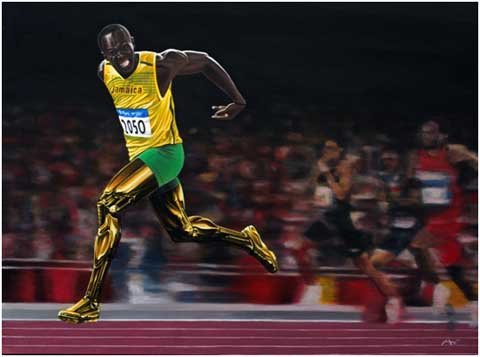 Steven Gerrard is now rated as probably the best midfielder in the World, and Lee jones in this painting has captured his passion, drive and determination that goes far beyond the realms of normal commitment on a football pitch.

The strength and character along with his incredible consistency week in week out is nothing short of the perfect footballer. 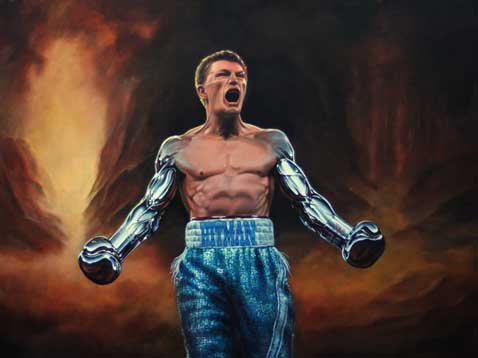 Out of every player today in world football, Lee feels no other player personifies the title of ‘Beyond Human’ more than Steven Gerrrard.

The portrait SG2050 is the latest in the Beyond Humanâ series of hyper-real paintings of elite athletes with the most finely tuned parts of the body morphing into Terminatoresque limbs. 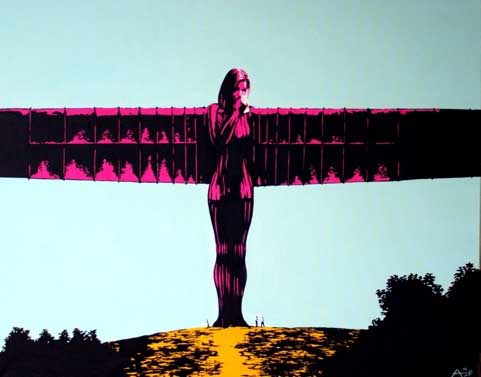 The series is endorsed with the creative input of each Sportsperson, and will be exhibited in a 2050 Sports.com exhibition Beyond Human at The Arts Club in Mayfair from 3-7 April.

The exhibition will include paintings and limited edition signed prints, as well as Lee’s paintings of Cheryl Cole as the Angel of the North and Boris Johnson.

Highly collectable limited edition prints of each painting, signed by the artist and athlete, are available on www.2050 Sports.com, with a percentage of all sales going to the nominated charity of each athlete.

I am a huge sports fan and I am inspired by the way top athletes finely tune their bodies to the point that they become almost superhuman.
Lee Jones

Lee Jones is an award-winning Liverpool based artist who has exhibited internationally, and recently had a solo exhibition in the Mayor of London’s EAST Festival. Jones is also a talented graffiti artist whose commissions include the redesign and rebranding of the Renegade Ducati Superbike team and set design for rock stars Oasis.