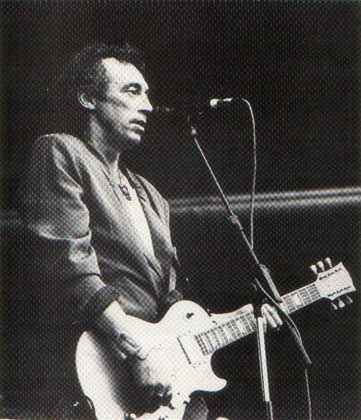 In 1968 Chicken Shack were a major signing to Mike Vernonâ€™s now legendary Blue Horizon label. Led by the mercurial Stan Webb on guitar and vocals, Chicken Shack were a band brimming full of talent, far outweighing the bands, groups and solo performers purveying the blues – a musical tradition in many forms, taken from the ‘Folk Roots Of Black America’. Probably the bands most well known member was Christine Perfect (later McVie) who went on at a later date to even greater fame and fortune with Fleetwood Mac.

The late sixties were a prolific time for Chicken Shack with their first two albums “40 Blue Fingers Freshly Packed And Ready To Go” and “O.K. Ken” storming into the U.K. top twenty, whilst the singles “When The Train Comes Back” and “Tears In The Wind” also scored heavily in the charts.

Stan’s blistering guitar style matched with a huge stage presence have made Chicken Shack a firm favourite of rock and blues fans everywhere.
Since those heady days of the late sixties a further fifteen albums have been released together with numerous compilations proving that Stan, really is “The Man”.

Throughout a distinguished career Stan Webb has played and recorded with the very best, including, Steveie Wonder, Howling Wolf, Taj Mahal, Peter Green and Canned Heat, whom he joined on guitar for a U.K. tour following the departure of the bands guitarist.

As the ’60’s have given way to the ’70’s; ’80’s and ’90’s, Stan Webb and Chicken Shack show no sign of slowing down, continually touring the U.K. and Europe to packed houses and rave reviews. In 1997 Stan received the Blue Heart Award for services to Blues in Germany, the previous recipient had been BB KING, a glowing testament to Stan Webb and his ongoing love of playing the blues.

In February 2003 Indigo Records released a brilliant new studio CD entitled â€œWebbâ€ â€“ which was followed in the Autumn of 2004 by a brand new live album entitled â€œStill Live After All These Yearsâ€ . The live Cd was recorded in Germany complete with brass section and its release coincided with that of a new DVD recorded at the Marine Theatre Lyme Regis.

In October/November 2004 Stan embarked on a 35 date UK tour with John Mayall, playing to sell-out houses up and down the Country.

As 2006 dawns, with plans for new CD and DVD releases â€œStan The Manâ€ shows no sign of slowing down.