STAINDs brand new record The Illusion Of Progress is out now.

The Springfield, Massachusetts natives is comprised of Aaron Lewis (vocals), with the original band line-up, including Mike Mushok (guitar), Jon Wysocki (drums, percussion) and Johnny April (bass, vocals). They play Belfast’s Mandela Hall this Sunday and it’s one show not to be missed. 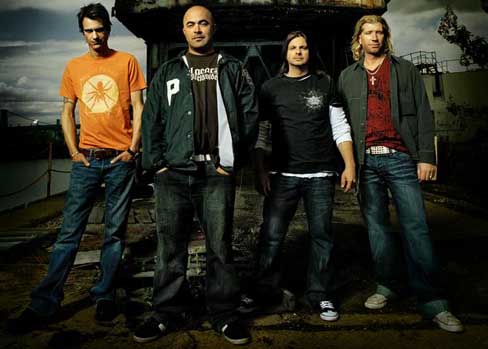 The Illusion Of Progress marks Staind’s sixth album and is the follow-up to 2005’s certified platinum Chapter V. Staind’s last three studio albums debuted at No. 1 on the Billboard Album Chart, earning their place as one of the most successful rock bands of the new millennium, selling over 12 million records worldwide. Staind joins an elite shortlist of five other artists who have also accomplished this feat, including U2, Dave Matthews Band, System Of A Down, Van Halen and Disturbed.

The Illusion Of Progress was produced by Johnny K (Plain White T’s, Kill Hannah, Disturbed) and recorded in the home studio of Staind vocalist Aaron Lewis. The band first showcased new single Believe in a special online launch with MySpace and recently shot a video for the track in Los Angeles with director Chris Simms (Lamb of God, Jimmy Eat World).

For our new album, we went into the studio with the mindset of making our heaviest record yet, offers Lewis, but the record that came out, with us writing in the studio, some of it has flavors of Pink Floyd and some has flavors of straight-up blues.

We didn’t use the same rigs that we use onstage, we used all vintage shit, guitars and amps, and I’m pretty psyched about it. The songs are pretty timeless in their texture, whereas typical Staind isn’t, sonic wise, necessarily timeless.

We’ve been fortunate that the last three albums have been No. 1 records, but that was never even a goal of ours, concludes Mushok. It never even entered our minds that we could have a No. 1 record, let alone three in a row! Will this next one be one? I don’t know But if it’s not, I’m not going to be heartbroken.

The most important thing for us is that it’s a record we love, because writing is a really selfish thing and you have to love what you put out. After that, I want other people to hear, like it, and be able to relate to it. If we can just accomplish that, that’s all we can ask for.
myspace.com/staind
staind.com
Tickets are priced £23.00 are available at all usual outlets. No Booking Fee applied at Katy Dalys / Mandela Hall.
Venue:Mandela Hall
Date:THIS Sunday 18th January
Ticket Price: £23.00 (Subject to booking fee)
Doors:7:00pm
Support:TBC
TICKET DETAILS
In person:From 22 Ticketmaster outlets province wide (Including Zavvi formerly Virgin) / Katy Daly’s Bar / Queens Student Union Front Desk
24hr hotlines:Tel: (NI) 0870 243 4455 (ROI) 0818 719 300
Buy online: geturticket.com /ticketmaster.ie /cdcleisure.com