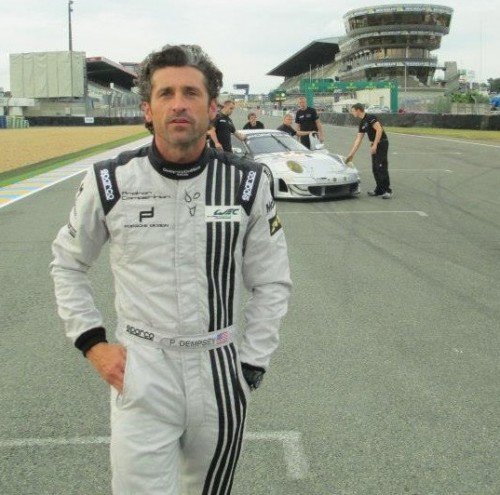 Patrick Dempsey and Andy Lally raced the No. 27 Dempsey Racing Porsche 911 GT3 Cup to their second podium finish of the 2013 American Le Mans Series (ALMS) season Saturday with a third-place showing at Circuit of The Americas in the competitive GT Challenge (GTC) class.

If you share the driver’s seat for 24 hours, preparation is everything…check out Patrick Dempsey, in this clever video, showing him and his team partners
Patrick Long and Joe Foster getting ready for the legendary 24 Hours.

TV and Hollywood star (and lead driver/owner of Dempsey Racing) Patrick Dempsey and teammates Joe Foster and Patrick Long, raced this past June in the 90th Anniversary 24 Hours of Le Mans at the legendary Circuit de la Sarthe.

On the 24 Hours Le Mans race Patrick said “Everything is magic about Le Mans. The history, how the track has evolved, and the drivers who have raced here, all of that really means something to me.”

On the 2013 American Le Mans Series he said: “It’s really nice to be on the podium here, in front of the WEC and everybody, it is a great facility.

Really tough track though, and the heat today, but Andy drove a great race, the guys did a real good job on the setup and great pit stops. It is just nice to get past fourth finally.”

Dempsey drove the race’s opening hour before handing off to Lally who rejoined in sixth place.