A SPECIAL Harry Potter edition of best-selling board game Destination to launch has been released in time for Christmas.
Destination Hogwarts (Â£24.99 RRP, 2-8 players) was launched at the world famous toy store Hamleys, Regent Street, London on Friday October 31. 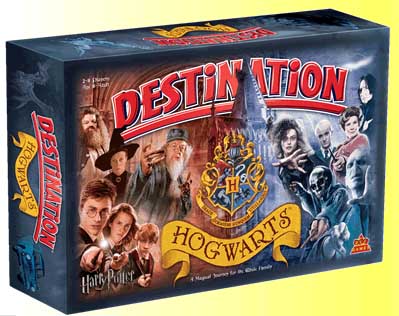 Rachel Lowe, owner of RTL Games, said: â€œHarry Potter and the incredible storylines created by JK Rowling are a perfect fit for wonderful game play by Harry Potter fans in Destination Hogwarts”.
The Destination series has become a phenomenal success and it now boasts 21 different regional and licensed versions within the range.
In Destination Hogwarts players assume the role of a student at Hogwarts School of and Witchcraft and Wizardry.
Just like Harry Potter, Ron Weasley and Hermione Granger, players visit iconic locations from the blockbuster movies, including Hagridâ€™s hut, the Great Hall, the black lake and the Forbidden Forest.
The ultimate family fun for Christmas, Destination Hogwarts is available to buy at Hamleys, Debenhams and from the official site destinationgame.com