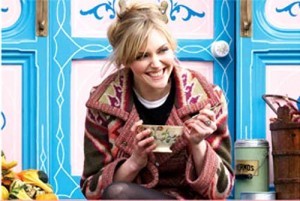 Sophie Dahl To Join BBC Two With Delicious New Cookery Series. Sophie Dahl, author and food writer, is coming to BBC Two with a brand new series for 2010. Made by Jamie Oliver’s Fresh One Productions, the series will feature Sophie cooking up delicious recipes and reminiscing on her own personal food memories.

Initially known for an international modelling career, Sophie turned her focus to writing and is now a best-selling novelist and columnist who has written widely about her passion for food and cooking. She now brings her talents to TV. Food for Sophie is a way of life, she says: “For me, food is more than just fuel; it’s a joy and an adventure.

“Cooking often serves as an emotional barometer, and with this show we will run the gamut â€“ from a solo dinner that suits melancholy to a homecoming feast for 20, it’s cooking with an anecdotal thread, irreverent, unpredictable and not without flaw.

“I am delighted to be working with both Fresh One and the BBC.”

Sophie’s kitchen is her familiar terrain, a place of solace and retreat where she can put on the radio and enjoy the sanctuary of cooking.

Her recipes reflect her unique approach to food and in this new series she will be sharing with viewers her favourite home-made delights.

Janice Hadlow, Controller of BBC Two, says: “We are delighted to be bringing Sophie’s culinary talents to the channel.

“Not only are her recipes fantastic, she’s honest, funny and warm.

“And she’ll be in great company alongside our other homecooking heroines, Delia and Nigella.”

The 6 x 30-minute programmes will begin shooting this summer for transmission next year.

Each episode will focus on a different theme for which Sophie will revisit treasured and nostalgic places giving insight into the resonance and meaning behind each recipe.

Zoe Collins, Head of Fresh One Productions, added: “Sophie really is a terrific cook and with her relaxed and refreshing style is a great new talent in the world of television food programming.

“We are excited to be working with her.”