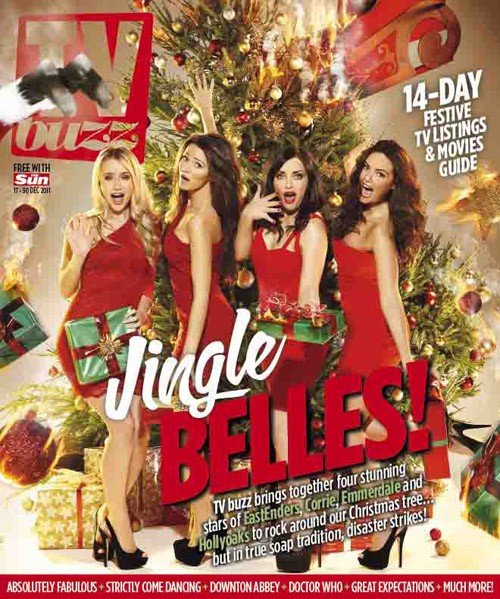 TV Buzz Magazine from The SUN, gets festive with the a few gorgeous soap babes; Michelle Keegan from Corrie, Shona McGarty from Eastenders, Sammy Winward from Emmerdale and Jen Metcalfe from Hollyaoks.

Michelle revealed to TV buzz what happens at the Corrie Christmas parties, “Jack P Shepherd [David] is always the first on the dance floor at Corrie.”

Shona told TV buzz she is not very good at buying people gifts, “I really don’t know what to get Matt for Christmas – maybe a better girlfriend!”

Whereas Jen’s partner Sylvain certainly doesn’t have that problem. Jen says, “He knew I was concerned about my cellulite, so he bought me some cream and massaged my legs for 20 minutes every night.”

Michelle revealed, “For my birthday he [Max] bought me a chihuahua called Pip. I’ve already got my sausage dog, so hopefully he won’t buy me another one for Christmas – I can’t manage three dogs!”

Michelle revealed, “Definitely Coronation Street, I’m not being biased but I watch it every single year.”

Shona admitted, “I like watching myself. I know that sounds odd, but it’s honest.”

On the other hand Jen revealed, “It’s fine if you’ve got a good story line. But I’m just sitting around with Mercedes’ baby. Boring! Does it make me broody? No the time’s not right for me yet.”

She also told TV buzz “when I’m at home I just sit around in my pyjamas, I don’t even shower.” She certainly does take it easy over Christmas!

2011 has been a great year for the soap stars: Michelle told TV buzz, “Obviously getting engaged. We haven’t made any wedding plans in next year yet, we’re just happy being engaged at the minute.”

Shona got excited, “I recently met the Jackson family in Gilgamesh restaurant in North London, which was amazing. And I got to sing A Whole New World with Peabo Bryson, who actually wrote it.”

And Jen got all soppy: “It has been the best year of my life, that’s because I’ve been with Sylvain a year.” Enough now girls!
Read more in TV Buzz Magazine from The SUN
facebook.com/TVbuzzmag