ROCK band Snow Patrol had a busy day yesterday as they traveled from Dublin to Belfast for two unveilings.

The Northern Ireland group were revealed as the headline act for the Guinness Arthurâ€™s Day celebrations taking place across Ireland on September 23. 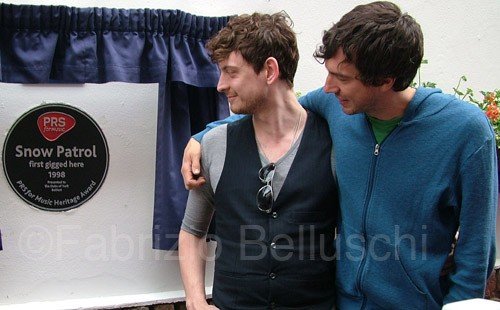 Gary and the lads will be joined by artists such as Paolo Nutini (who also spent the morning at Bruxelles bar in Dublin), The Macabees, Magic Numbers, The Heathers and many many more.

Speaking of the celebrations Gary, who will take to the stage at Ward Park in Bangor tomorrow with the band in front of 40,000 fans for their homecoming, said he was looking forward to â€œstripping backâ€ their show.

After their intimate acoustic set the band were off to Belfast to their favourite bar The Duke Of York in the famous Cathedral Quarter. 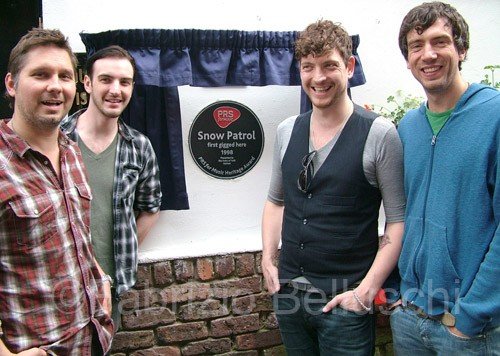 Snow Patrol were being presented with a special plaque, which they unveiled at the bar.

They are the sixth act to be honoured by the PRS, along with Blur, Elton John, Jethro Tull, Squeeze and Dire Straits.

The plaque is a Music Heritage Award, to celebrate their first gig in the Belfast pub in 1998.

Lead singer Gary and drummer Jonny Quinn were in the original line-up 12 years ago when they first played the popular Duke Of York bar.

They were also joined by Nathan Connolly who replaced former bassist Mark McClelland.

Speaking of their early gigs Gary said: â€œWe never sold out the Duke Of York, and to be honest, getting 30 people back then was a good night.

â€œWe played pubs like the Duke Of York, Morrisons, the Crescent Arts Centre.â€

Johnny added: â€œWhat I remember of the Duke Of York back then was that we did two nights, one acoustic and one as a full band, and there werenâ€™t many people there.

â€œItâ€™s great to be back where it all started. It hasnâ€™t changed much at all, except thereâ€™s more posters on the walls now.â€
BY TINA CALDER
PHOTOS BY FABRIZIO BELLUSCHI
Â©FAMEmagazine