Look at the Guinness Book Of Hit Singles and you could be forgiven for thinking Smokieâ€™s success story was a 1970s phenomenon. After all, 11 of their 14 British hits came in that eventful musical decade. However, their massive success story has continued to flourish around the globe including Scandinavia, South Africa, Germany and even China.
Smokie are a band which has sold out tours and gained platinum records in four decades â€“ 70s, 80s, 90s and the present day.A quick recap then on past glories. Smokie first got together at school in Yorkshire in the late 60s. 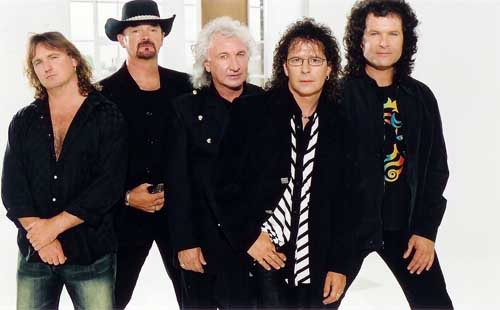 After going through various names and styles, they signed with Mickie Mostâ€™s then ultra-hot RAK label and found themselves chartbound. Songs like â€˜If You Think You Know How To Love Meâ€™, â€˜Donâ€™t Play Your Rockâ€™nâ€™Roll To Meâ€™, â€˜Itâ€™s Your Lifeâ€™ and â€˜Oh Carolâ€™ (all Top 10 entries) became radio staples and gave Smokie their ticket to travel the world.

The sound was a combination of hook-laden songs and Smokieâ€™s distinctive but unashamedly Stateside-influenced soft-rock harmonies, their secret being their vocal blend â€“ a rasping, emotion-drenched lead set against melodic harmonies that produces an unique, bittersweet result.

After accumulating worldwide sales of over 30 million, Smokie made â€˜Wild Horsesâ€™, a 1997 Nashville-recorded album that cost the band a quarter of a million pounds to produce. It gave them a foothold in US country radio, while hits collections continue to find a ready market. That trend continued with â€˜Uncoveredâ€™ and â€˜Uncovered Tooâ€™, which were both huge hits throughout Scandinavia â€“ reaching the top 5 in Denmark, Finland, Norway and Sweden â€“ achieving double platinum status

In 2003, Smokie released the ultimate greatest hits collection.Â  Entitled “The Box Set”, the collection consisted of 10 CD’s spanning the decades from the 1970’s through to today and gained Gold and Platinum awards throughout Scandinavia.

2004 was spent mainly in the studio writing and recording their brand new album â€œOn the Wireâ€. Written mainly by Smokie themselves, this chart topping album has proved that Smokie are still on top form

2008 sees the release of the bandâ€™s latest release, Smokieâ€™s All Time Greatest Hits Collection, a 3 CD collection of Smokieâ€™s best known tracks, including Alice, Will You Still Love Me Tomorrow, Iâ€™ll Meet You At Midnight, along with some other favourites Whiskey In The Jar, (I Just) Died In Your Arms Tonight, I Donâ€™t Wanna Talk About It
Thereâ€™s no smoke without fire, so the saying goes â€“ and Smokie are still firing on all five cylinders!
SMOKIE
All Time Greatest Hits Tour
The Waterfront
Sunday 15th March 2009
Tickets Â£25.00 & Â£22.50 on sale this Friday, 14th November, from
The Waterfront Box Office
Credit Card Bookings 028 90334455
Book online @ wonderlandpromotions.co.uk & waterfront.co.uk