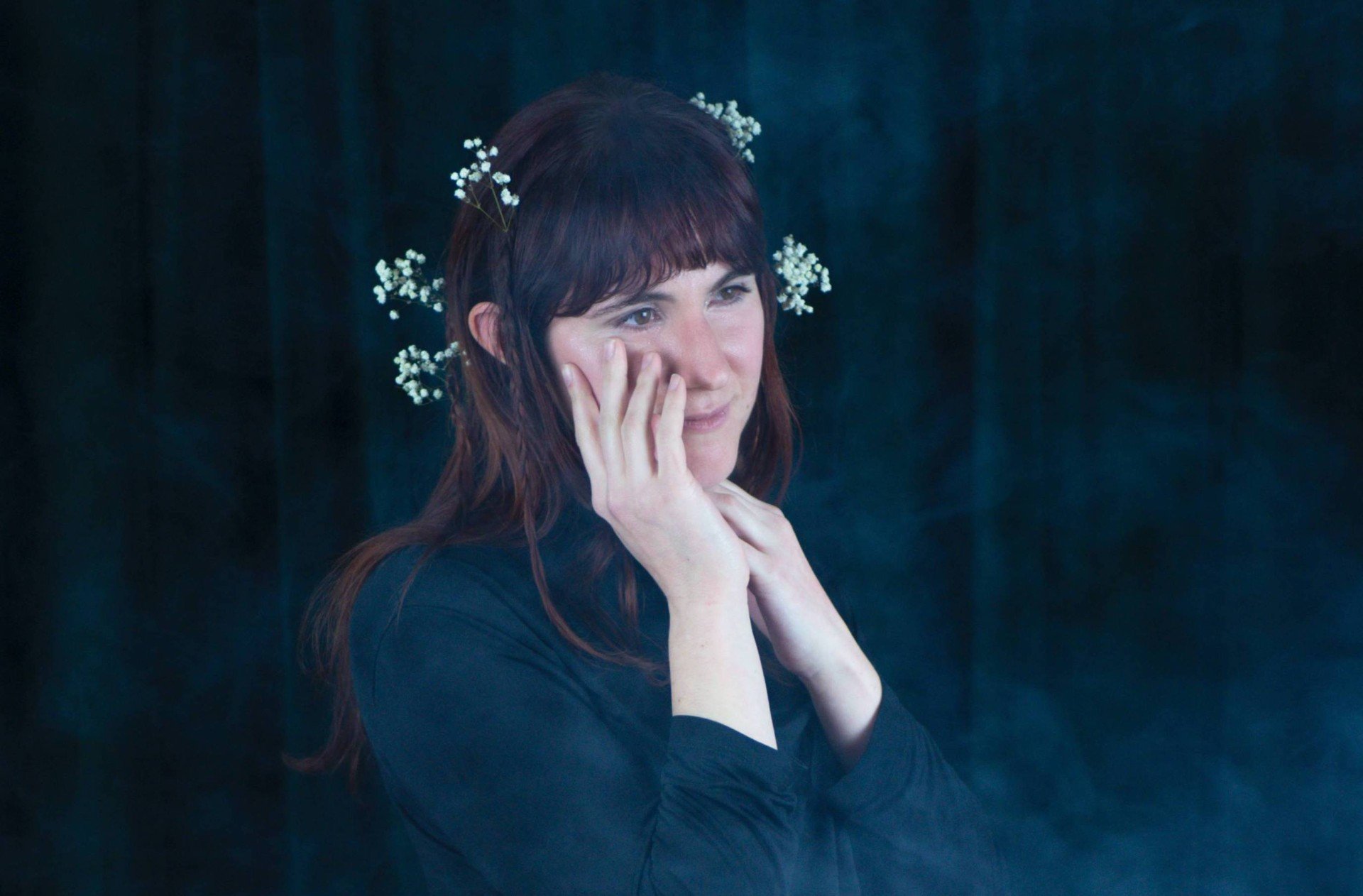 With her highly anticipated new EP Off The Rails set to arrive later this year, Miami-born but Seattle-based artist Slow Shudder continues the support for her upcoming release with her latest single ‘Just As You Are’. Following on from the previously shared tracks Replay and the EP’s title-track, she looks to continue the uplifting and euphoric electro-pop that have seen her gather lashings of praise these last few months.

So we decided to sit down with her to find out more about her influences, both musically and culturally, and what we can expect from her throughout the rest of the year.

I’m not entirely sure which album I bought first but I remember clearly the first tape (haha yes, tape) that I was given! My friend’s older brother was really into punk music and I was asking him about it because I’d heard “All The Small Things” by blink-182 on the radio and loved it. I think I was maybe 10 or 11.

He gave me an old cassette of The Sex Pistols – “The Great Rock & Roll Swindle”, which was super random as it was their film’s soundtrack, not one of their studio albums, but it opened up a whole new world of possibilities for me musically. Until then, aside from the music my family showed me, I’d mostly relied on the radio to discover new artists – listening first to the oldies station and memorizing the lyrics to doo-wop & soul songs, then to 90s pop & mainstream hip hop (my childhood favourites were Christina Aguilera & Will Smith), as well as the dance music I’d hear on late night radio growing up in Miami (power 96 broadcasting Miami Bass, shout out DJ Laz for getting me into dance music)

But yeah, when I heard that Sex Pistols tape, I was so entranced that I brought it to a record store called Spec’s (RIP) and asked the clerk to recommend some punk bands to me, and I’m pretty sure I bought “Dookie” by Green Day, “Enema of the State” by blink-182, and picked up a compilation called “Hopelessly Devoted to You Too” (a Hopeless Records compilation) at the same time.

That’s a tough question because there are so many and they change all the time. Off the top of my head, I know my songwriting has been heavily influenced by Kimya Dawson, Radiohead, Dean & Britta, Kathleen Hanna, Animal Collective, The xx, Liz Phair, The Postal Service, Neutral Milk Hotel, and James Blake. Production-wise, I started off making glitch music, and was very influenced by Squarepusher and Aphex Twin. When I got into producing dance music around 2010-2011, like many others, Skrillex was a huge inspiration (I have half a hard drive full of projects where I was making very obvious Skrillex rip-offs, lol).

Current inspirations are artists I’m grateful to know personally and perform with / collaborate with, such as Cosmicosmo, Liyv, SAKIMA, Marcioz, Holliday Howe, AObeats, Strider and Chong the Nomad.

In terms of why they’ve inspired me, I feel like I’m drawn to artists who take risks. Whether that’s in the songwriting, production, subject matter or in how they present themselves as artists, it’s always super exciting and interesting to me to see an artist being brave enough to trying something new, something different.

So many things! I’m really inspired by books, both fiction and nonfiction. I often get ideas for lyrics when I’m reading something. Right now I’m reading “Autobiography of Red” by Anne Carson, which my new neighbour across the hall lent to me. It’s so wild!

Going to museums, especially modern art museums, helps me a lot. Just looking at visual art online is very inspiring. Another thing is meditation, which I’ve become more dedicated to this year. I’ve meditated every day for months now and it’s really improved my mental health, and allowed more space for ideas to arise. Yoga as well, I’ve been practicing on & off for over 10 years. Whenever I’m doing yoga consistently, I get lots of songs.

I also get inspired by exploring whether around my neighbourhood, traveling to a new place or in nature. Just walking around Seattle every day is inspiring, and I felt the same when I lived in LA, London, and New York. I recently returned from a trip to Maine and then Iceland, and got so many ideas, as I always have when I’ve visited both of those amazing places. However, I think the most inspiring non-musical thing is conversations with people and relationships. I love having deep conversations, abstract conversations. Most of my work arrives out of me processing the communication I have with others.

Tell us about your new track ‘Just As You Are’, and your forthcoming EP!

‘Just As You Are’ is a song that means a lot of things to me. I wrote it first for someone else, who I care about endlessly, who struggles with self-worth. I then realized it wasn’t just for that person, it was for lots of people I know and myself. It’s a reminder to cut yourself some slack and love yourself for the person you are right now, not the person you wish you were. It’s also a reminder to cut loose, drop the guard and go deep with others, to actually dedicate time and energy to getting to know people for who they really are, instead of getting caught up in external appearances. I find myself and lots of my friends getting unnecessarily preoccupied with statistics and metrics. It’s difficult to avoid letting social media dictate your sense of value, at times. There’s a lot of energy spent on “connecting” in ways that are surface level, and often the façade of connection is worse than no connection at all. I feel like I’m trying to grapple with that with ‘Just As You Are’.

I’m so excited about my forthcoming EP, it’s been years in the making! I wanted to show various sides of myself as an artist and as a person, and hopefully help listeners access a range of emotions. Overall, the lyrics tell a story of the journey that I often find myself taking when I go through a relationship, whether it’s romantic or platonic. At first, I find myself being really open. I love getting to know someone new and am usually not afraid to go deep during the first conversation. This is what the title track, ‘Off The Rail’, is about. The next track, ‘Strongest Drug’, is about the times I take that a bit too far. It’s about when I get nervous I’ve shared too much with someone new, I make mistakes and say things that are unintentionally hurtful in an attempt to create some distance, or just step back from talking as much and protect myself. Then ‘Replay’ is what happens when someone rides that stage out with me and we come out the other side, but I’m still slightly apprehensive about getting more involved, about trusting. ‘Ideal Future’ is when I decide to run away with the possibilities, when I decide I can develop a relationship that challenges any preconceived notions and doubts that I have. Finally, ‘Just As You Are’ gets into the beginnings of something real and lasting. I can present the truth of who I am, including the messy parts, and receive it from others, and begin the first steps of a solid relationship.

In the production, I wanted to challenge myself to do lots of strange and interesting things. I use a lot of field recordings that I’ve made myself, in cities I’ve lived in and in places I’ve visited. Percussion elements made from banging rocks onto handrails, whooshes made from trains passing by, stuff like that haha. I used Serum a lot for the synth work and tried to make most of the sounds from scratch, instead of starting with a preset and working from there. I also used a lot of distortion – there are like at least 5 Amp FX across different channels in every one of my Ableton projects. I’ve always found gritty aesthetics appealing, especially when complementing lyrics about vulnerable subject matter and personal growth.

Three of the songs are totally self-produced, ‘Off The Rails’, ‘Strongest Drug’, and ‘Ideal Future’, and I’m grateful to have collaborated on the production with Cosmicosmo in ‘Replay’ and SAKIMA in ‘Just As You Are’.

More songs, more gigs! I hope to release at least one more solo track in 2019, and possibly a remix and a collaboration. I’ve written tons of songs this year that are pretty much finished, and tons that are still just voice notes on my phone, so I just need to decide what to do with them. I may start a couple side projects for the more lo-fi bedroom pop I’ve been writing and the experimental, weird music I’ve been producing, or put everything out under Slow Shudder if I can get it to make sense and feel cohesive with the rest of the project. I’m working with some of my favourite artists right now and hope to share some of that work either this year or in early 2020.

Very excited to be visiting London and NYC in October and November for sessions, and will be playing at least one DJ gig in London, possibly a live set too if things all come together. I’ll be DJing at a con in Orlando, FL in December, which should be super fun. Aside from all that, I’ll continue regularly playing around Seattle / on the west coast, and writing as much as I can.

Just As You Are is available to stream and download now, and is lifted from her forthcoming EP ‘Off The Rails’.