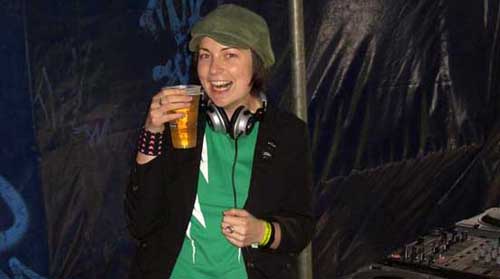 SKIBUNNY (live)
By the time Tanya Mellotte and Mark Gordon had turned 21 theyâ€™d recorded 4 Peel Sessions, had a Melody Maker Single of The Week and appeared on the NME C96 CD, as members of Northern Irish band TUNIC. They had also founded the Belfast club SKIBUNNY in a tiny Italian restaurant in Belfast. It wasnâ€™t long before Radio 1 started using words like â€œgroundbreakingâ€. A decade later, 2007 has seen the pair DJing across Europe, USA and Japan as well as remixing the likes of FORWARD RUSSIA, THE FREELANCE HELLRAISER, HANDSOMEBOY TECHNIQUE and OPPENHEIMER (used by NIKE Online) and shows warming up the crowd for The Rapture, Erol Alken, DFA Records and CSS, as well as bringing Bonde Do Role and The Go Team across to Belfast to DJ at Skibunny parties. Now, finally, comes the first release of original material. Sitting somewhere between Joy Division, Fourtet and The Cure, â€œAah oohâ€ is a bittersweet slice of electro-acoustic pop. The B-Side is a remix from new friend Handsomeboy Technique, from Japanâ€™s Second Royal records. SKIBUNNYâ€™s highly anticipated debut live show takes place at their own now legendary Skibunny Christmas Caper, featuring a guest vocal appearance from Lafaroâ€™s Jonny Black.

CASHIER No.9
For the past year Cashier No.9 has been a loose project of recording sessions, self funded releases and chronic insomnia, while holding down day jobs with Corrigan and Alloy Mental. In Oct 2006 Cashier No.9 took part in the BBC Electric Proms in London. Performing with the unusual and exciting combination of schu platter dancers (providing percussion) and gospel singers, the result was a sold out gig, described by Radio 1â€™s Huw Stephens as “awesome”. Since then the DJ has championed Cashier No.9 on his radio show and podcasts. The analogue charm of Cashier No.9 has been described as confessional, intimate, but never too sentimental.

PANAMA KINGS
â€œGod save the Panama Kingsâ€ â€“ thatâ€™s the chant youâ€™ll hear resounding around Belfast these days from those in the know. Featuring ex-members of Clone Quartet, The Smiles and the Fast Emperors, think Modest Mouse meets Superchunk and youâ€™re on the right track. All hail â€œthe new regents of alternative quirk-soulâ€ (BBC Radio Ulster, ATL)