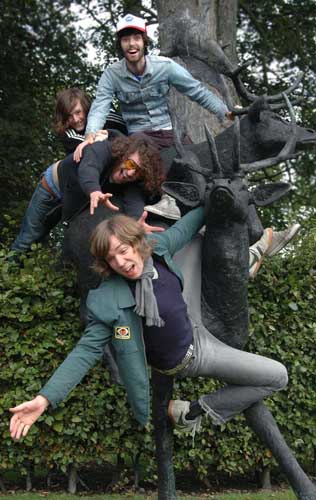 Local boys Sixstarhotel released their debut LP â€˜A Kind of Crusadeâ€™ earlier this year to instant acclaim from across the UK music press. This is a band with a genuine DIY ethic, touring relentlessly, building up a solid fan base and huge arsenal of songs. Seeing the band play live, itâ€™s easy to see what the fuss is all about. Impassioned vocals soar above cathartic chords and pounding off-beat drums, every song played like it was their last.

Their progress has not gone unnoticed, with 2007 proving to be their most successful year to date. As well as recording tracks with esteemed producers Richard Flack (Queens of the Stone Age, Foo Fighters) and Mark Aubrey (Bloc Party) they completed a successful month long tour of Denmark and shared stages with, among others, You Say Party! We Say Die! and The Young Knives.

The band makes a welcome return to The Limelight following their explosive, sold out performance in December, and marks the Second Birthday of Two Step.