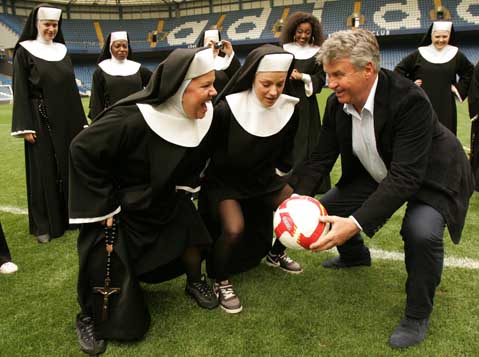 The cast of the new musical comedy SISTER ACT got the ultimate lesson in teamwork today as they travelled to Stamford Bridge for a private training session with Chelsea boss Guus Hiddink. 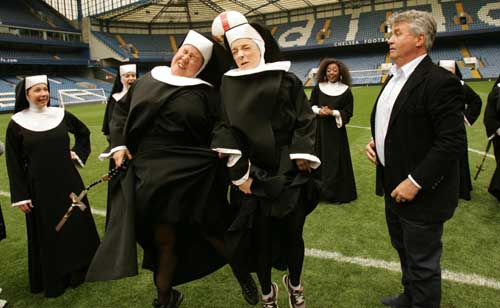 Producers wanted to ensure that the troop of nuns were primed and ready for the rigours of their gruelling eight show a week schedule and called on the renowned expertise of the Chelsea and Russia manager. 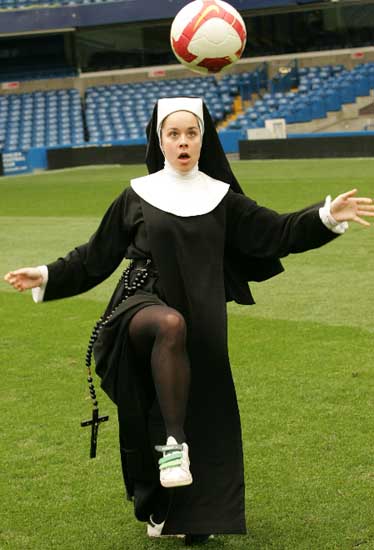 Guus Hiddink welcomed the nuns to the Stamford Bridge ground, the West London home of Chelsea Football Club, where they were drilled in essential team skills. They donned their habits and completed an intense session of penalty practise, dribbling runs and free kicks and got an all important team talk from Mr Hiddink.

This exclusive motivational session, along with the inspirational standing ovations that the cast have enjoyed so far at Sister Act’s preview performances, mean they are on course to raise the roof off the Palladium when the show officially opens on Tuesday June 2, the beginning of their year-long fixture at the venue.

Guus Hiddink said:
The nuns trained very well today, they really made me sweat! They’re great working together as a team and they’re not afraid to get stuck in. One particular nun really impressed me with her defensive skills if I ever have a spare place on the bench, I may need to give her a call! You need to work hard out there on the pitch but you have to enjoy it too…..the sisters seem to do both brilliantly and I’m sure it will be the same up on stage.

After a global search, 24 year old US actress Patina Miller has been cast to make her West End debut playing the lead role of Deloris Van Cartier in the divine new musical comedy SISTER ACT.

Born and raised in South Carolina, Patina’s previous credits include the critically acclaimed 2008 production of Hair in New York and the hit US soap All My Children. The role of Deloris in SISTER ACT was made famous by Whoopi Goldberg in the movie of the same name, and Goldberg is a co-producer of the stage version.

Starring alongside Patina will be Sheila Hancock as Mother Superior. To many, a national treasure and a multi-BAFTA nominee, Sheila’s career spans theatre, television, radio and film and she won a 2007 Olivier Award for her performance in Cabaret. Dad’s Army and EastEnders actor Ian Lavender also stars as Monsignor Howard. SISTER ACT opens at the London Palladium on 2 June.

SISTER ACT features a score by Alan Menken, eight-time Oscar winner and composer of many of the world famous songs from Disney’s movies, including The Little Mermaid, Beauty & The Beast, Aladdin and Enchanted, with lyrics from his long- time collaborator Glenn Slater. The book is by the award-winning team Cheri and Bill Steinkellner, whose writing credits include the classic television comedy Cheers, and the production is directed by Peter Schneider.
sisteractthemusical.com