Who remembers the toy Meccano?

You definitely will after listening to garage-band, The Fades, new single, ‘Meccano’, set for digital release on April 1 through Genepool Records.
The single, “Meccano”, is exactly what the title suggests – boys toy, Meccano.

Nothing in depth or meaningful about it. Nor is it a quirky metaphor for something else. 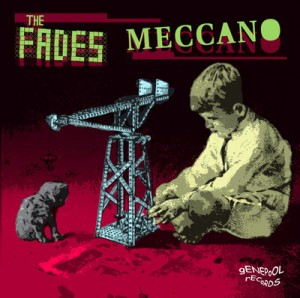 The song contains one lyric; “I don’t what’s wrong with Johnny, he don’t like Meccano!”

This is somewhat repetitive and perhaps slightly irritating, however in saying that, if this music appeals to you, you definitely won’t forget the words.

It’s also a very catchy tune, for example, as I sit here sipping on my Pepsi Max, in my head I’m singing “Meccano” in my head.

Which is a good thing for The Fades. Unlike some artists out there who aren’t as easy to remember, people will no doubt hear this on the radio, and think one or two things.

Either way, I think it’s a fun, tongue-in-cheek song, that will have the nation wondering what IS wrong with Johnny?!

And no doubt, it will probably do quite well for itself.

The repetitive lyric song could be worse, does anybody remember Crazy Frog? It was number one…
By Livy Kerr