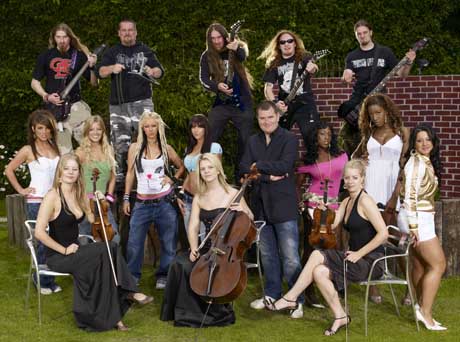 Singing With The EnemyÂ  is a brand new 6 x 60â€™ thought-provoking factual entertainment series for BBC3.

Imagine a wholesome all-girl pop band forced to collaborate with a misogynistic death metal group. Or a sleazy, sex-obsessed punk band sharing a house with an evangelical Christian group. They come from radically different tribes and now theyâ€™re going to have to live with their worst enemy while they attempt to write, record and perform a genre-defying song. Itâ€™s an opportunity to break through for talented unsigned bands desperate for recognition. But is it a recipe for musical and moral meltdown?

Each episode of Singing with the Enemy brings together two bands with nothing in common other than a passion for music and a desire to expand their musical horizons. Under the guidance of top record producer Tommy D the bands will have just one week to dream up and record a brand new track and then perform a surprise gig in front of their die-hard fans. The challenges extend far beyond trying to unite two opposing musical styles. Living together in an intense pressure cooker of creativity, the bands must struggle to reconcile their differences – whether cultural, religious or ideological as well as musical – if they want to stand a hope of meeting the tight studio deadline and impressing Tommy D.

Itâ€™s not just the bandsâ€™ reputations on the line. Tommy D is used to working with high profile artists from Kanye West to Kylie but can he work his magic on these music industry virgins and create a chart-topping track?

Singing With the Enemy brings opposites together and makes them collaborate, when they’d normally cross the road to avoid one another. Through music, this series explores some of the biggest faultlines in Britain today, from class division to religious intolerance, from sexual identity to racial attitudes.

Band Profiles
K-Tron And The Exploding Triangles
Theyâ€™re a bunch of maverick musicians, artists and club promoters, an exhilarating electro-rock collective from ultra hip Shoreditch in East London who are inspired by experimental artists such as Bowie and Bjork. Their wild anarchic performances take things to the extreme, frequently involving blood, vomit and urine.

K-tron love to shock people with their creative style and punk vigour, singing about serial killers and child murderers. Anyone who isnâ€™t open-minded would find their â€˜art-houseâ€™ freak show a test to the senses. All they want is creative freedom and what they most detest is fakeness.

Code 5
Code 5 are five fame hungry lads on a mission to become the world’s hottest boy band. They are a manufactured vocal harmony group who after just a few months together were supporting Westlife at Wembley on the UK leg of their tour.

In the band, there’s Ash, the cousin of Antony Costa from boyband Blue, 24 year old Jossy who as the eldest in the band is aware that this is his last stab at boyband fame, songwriter and official ‘voice’ of the band, Mitch, cheeky chappy Deano and naÃ¯ve 18 year old Yorkshireman Chris.

Code 5 are surrounded by a team of people who plan and plot their every move. They are willing to forego artistic freedom for success and happy to sing Lionel Ritchie covers if it will propel them to the big time.
Programme Two: Week 41

Dweeb
Theyâ€™re a evangelical Christian band who want to convert the non- believers through their music. Their aim is to spread love without judgment and live like Jesus.

Their sound is energetic rock music with a twist of jazzy funk. Their stage show exudes a passion and sincerity that comes from their belief in God.

Lead singer Tim preaches his Christian beliefs to non-believers and thinks that they will see the light eventually. He says: â€œI just want people to feel the love of Jesus that I feel and for it to fill their lives with beauty.â€

Paparazzi Whore
Sleaze punk band Paparazzi Whore from Hull like to shock, influenced by bands like The Stranglers, The Sex Pistols and Siouxsie and the Banshees. They are an overtly sexual group, not afraid to push boundaries including the use of strippers on stage during their live performances.

Lead singer Micci has been living with the bandâ€™s male bass guitarist Chris for 17 years. Micci is also sleeping with backing vocalist Susanne. Micci and Susanne canâ€™t keep their hands off each other, and Chris, on the outside, loves it.

The band members are fervently pro-gay rights, against religious dogma and believe wholeheartedly in sexual and artistic freedom.

Lyrically Scarâ€™d
Lyrically Scarâ€™d are an ultra-hard, macho grime crew from South London. 19 year olds Triple Platt, Jay V and MDR have been friends since school and started rapping together in year 9.

Still an underground genre, grime has become synonymous with gang culture and violence. But Lyrically Scarâ€™d are on a three-man mission to change its reputation and take it out of South London to the wider world. They think that their new positive approach can help inspire other kids to go on the right path.

The Dirty Cakes
Flamboyant and camp, the Dirty Cakes describe themselves as a cabaret rock band. The Brighton band was started by thirty-something lead singer Stuart back in 1998 and two years ago he invited drummer Evan and keyboardist/bassist Max to join him.

They take their inspiration from the cabaret culture of 1930â€™s Berlin, a brief period of decadence between the world wars, which was brought to an abrupt halt when the Nazis came to power. Seeing themselves as troubadours, the Dirty Cakes want to take their revolutionary sound beyond the bars of Brighton to the world beyond. e Programme Four: Week 43

Severed Heaven
The band conists of five fearsome, feminist doom metal maidens. Everyone in the group rejects conforming to the clichÃ© of â€˜femineâ€™. The girls wonâ€™t be judged by their bodies or the way they look- they want to take on the male dominated metal industry and show women can rock just as well, if not better than any men.

Lead singer Satanica and guitarist Leanne are girlfriends but insist the music comes first. â€We donâ€™t snog on stage, but we also arenâ€™t going to hid the fact that we are gay, If someone doesnâ€™t like it, then they can f*ck off.â€

The boys rank their status in the group by the amount of blow jobs or shags they get backstage. So confident are they in their sexual magnetism, they think they could turn any lesbian.

Lead singer Jade works on a building site by day, but dreams of the day the band becomes rich and famous and he can â€œsit in a hot tub with five hot girls wanting my cockâ€. Lead guitarist and manager of the band Joe, struggles to keep the boys sober enough to get on stage.

Life hasnâ€™t been easy for any of the girls and theyâ€™ve all had to cope with childhood miseries and hardships. But these childhood struggles have driven them to succeed in a male-dominated hip hop industry and they use their experiences in their raps.

Don Diva Delight believe that Hip Hop is a way of life and a culture and to stay in the game you have to always look good and be fashion trendsetters. Collectively, and individually they want to break America and are well on their way to doing so.

Apollo Strings
Apollo Strings are three posh totty classical music prodigies from Somerset. Formed by twin sisters Stephanie and Natalie at the tender age of 5, the girls got scholarships to Wells Cathedral School, one of the top music schools in the country, and now attend the Royal Academy of Music

The most recent addition to the band, Clemmie, has been playing the cello for as long as she can remember and is totally in love with her instrument which she calls Thomas.

The girls are totally immersed in their world of classical music, but want to show the outside world that classical musicians are not boring and stuffy.

Fallen Angelz model themselves on boy bands like N’sync and The Back Street Boys. They think most girls in the charts today are just factory built mannequins. â€œWe are not a typical girl band. We are all about the dancing and having fun. Weâ€™re not puppets.â€

Amputated
Amputated formed in 2002 with the aim of becoming â€œthe sickest band to hit the Bristol death metal scene.â€ With extreme stage performances and songs like â€œMenstrual Cunt Fartâ€ and â€œLove â€˜Em and Cleave â€˜Emâ€ they may well have fulfilled their ambition.

Amputatedâ€™s songs are intended to offend womankind. Lead singer Mark, who claims that metal is his life and without it, heâ€™d be dead, knows his lyrics are sexist, but is no apologist: â€œEvery woman we sing about is a piece of meat, to be butchered once weâ€™ve done what we want with her.â€

Amputated have released their first album â€œGargling With Infected Semenâ€ and have just completed their first European tour.
myspace.com/singingwiththeenemy