Simply Red have confirmed two Irish dates as part of their Greatest Hits World Tour.
Simply Red will play The O2, Dublin on Friday 21 August and the Odyssey Arena, Belfast on Saturday 22 August, 2009. Tickets will go on sale this Monday 30 March at 9.00am from Ticketmaster outlets nationwide. Both shows are fully seated.

In February of this year Simply Red embarked on a massive Greatest Hits World tour, coinciding with the 25th Anniversary of the band forming. They will play to over a million people by the end of the tour in 2010, starting out in Thailand, Australia, New Zealand, Mexico, Brazil, Chile and the USA before heading back to the UK and Europe. The tour was previewed at the sold out O2 Arena in London on December 3rd 2008. 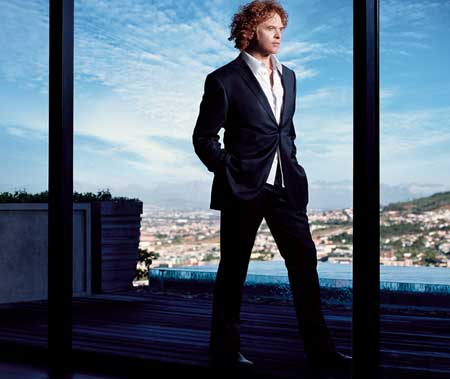 Simply Red’s classic pop and elegant ballads have provided an uplifting and emotional soundtrack to our turbulent times. Their phenomenal career has spanned three decades; theyâ€™ve released 10 studio albums racking up over fifty million global sales, notched up over 30 top 40 UK singles, won countless awards including 3 Brits, 2 Ivor Novellos and a Mobo Special Achievement. They gained the rarest prize for a British artist with not just one, but TWO number one hits in the USA; the album â€˜Starsâ€™ was the biggest selling album in the UK for two consecutive years and they have played more than 1000 live shows to over 10 million people.

The ultimate album by Simply Red; The Greatest Hits 25′ was released in November 2008, comprising 25 tracks on a double CD.

Itâ€™s been a long, strange and sometimes stormy ride for flame haired, politically outspoken, Simply Red founder, songwriter and front-man Mick Hucknall. With his Celtic rasp and easy flowing croon control that effortlessly ebbs and flows with the music, rarely has a British vocalist touched the blend of impeccable technique and emotional resonance that characterises the legendary American soul stars.

As their Greatest Hits collection proves, Hucknall is no slouch when it comes to songwriting. From the careworn introspection of his undisputed classic ‘Holding Back The Years’, the righteous strut of ‘The Right Thing’, the exuberant infatuation of ‘A New Flame’, the tender admiration of ‘You’ve Got It’, the amorous flight of ‘Stars’, these are songs that get under your skin and stay there.

A music fan through and through, Hucknall has also proved an excellent judge of a cover version. Simply Red announced themselves with the gritty reworking of The Valentine Brothers blue collar attack on the economic injustices of Reagonomics, â€˜Moneyâ€™s Too Tight To Mentionâ€™ and have crafted hits from songs as diverse as Harold Melvinâ€™s beautiful ballad â€˜If You Donâ€™t Know Me By Nowâ€™, reggae legend Gregory Isaacâ€™s lilting â€˜Night Nurseâ€™, the Holliesâ€™ pop epic â€˜The Air That I Breatheâ€™ and The Stylistics sweetly sentimental â€˜You Make Me Feel Brand New.â€™ Like any great singer, Hucknall always makes the song his own and his brand new version of The Moody Blues heart-rending farewell ballad ‘Go Now’ is no exception.
MCD Present
SIMPLY RED
Plus Special Guests
The O2, Dublin – Friday 21 August 2009
The Odyssey Arena, Belfast – Saturday 22 August 2009
Tickets On Sale: This Monday 30 March at 9.00am
In person: From 100 Ticketmaster Outlets Nationwide
24hr hotline: Tel: (ROI) 0818 719 300; (NI) Tel: 0870 243 4455
Odyssey Arena Box Office: Tel: 028 9073 9074
Buy online:ticketmaster.ie