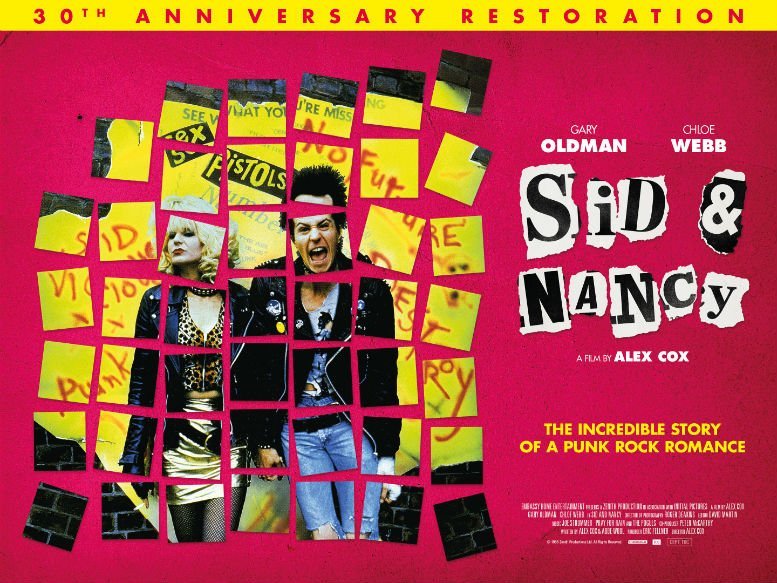 The 1986 cult classic – a vivid and shocking portrait of the mutually destructive drug-and-sex filled relationship between Sid Vicious and his American girlfriend Nancy Spungen – will be released in cinemas on 5th August via the ICO, and will show as part of The BFI’s Punk.London Season to celebrate the film’s 30th anniversary, and the 40th anniversary of the birth of Punk.

With an original soundtrack featuring punk and post-punk artists such as Joe Strummer (The Clash), and The Pogues, SID & NANCY is one of the defining films of the punk era.

It’s 1977 and The Sex Pistols have taken the music world by storm with lead singer Johnny Rotten (Andrew Schofield) and bass guitarist Sid Vicious (Gary Oldman – Tinker, Tailor Soldier Spy, The Dark Knight) enjoying all the spoils that fame and money have to offer. Vicious embarks on a relationship with an American groupie – Nancy (Chloe Webb – Shameless) – who has come to London to pursue him but the couple’s increasing drug use frays relationships with Johnny and the rest of the band.

With Nancy in tow, The Sex Pistols embark on a chaotic tour US tour which ends in disaster with the band breaking up. Vicious attempts to start a solo career, with Nancy as his manager, but by now both are dangerously addicted to heroin. The two continue in a downward, destructive spiral until, in October 1978 at the Chelsea Hotel in New York,Nancy is found stabbed with Sid lying prostrate at her side. Arrested and accused of murder, he dies of an overdose before his trial.