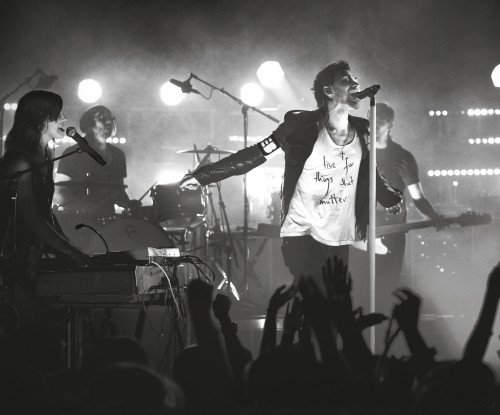 Nashville rockers Shirock have been in London quite a bit recently. Last month, Chuck and Pap Shirock performed some acoustic shows together whilst doing promo for their recently released debut UK single “New Solution”.

It’s this debut single that kickstarts the evening. Although Chuck and Pap aren’t here with the rest of their usual band, they’ve drafted in some UK based replacements tonight and the set still sounds as tight as ever. A little overly American, shiny pop rock in places, you can’t deny that they have an ear for a catchy tune.

“Still Young” is another highlight, bringing bombastic pop rock to north London. An epic piano riff starts the proceedings as the band build to a crescendoing chorus, with Chuck and Pap both share intertwining vocals.

There are elements of The Fray and Coldplay here and although not every song hits the mark, their stand-out songs (the aforementioned “Still Young”, “New Solution” and others like “Man Inside”) are definitely fist clenching, lighters-in-the-air tunes that feel as though they should be performed to the arena-sized masses.

It’s unsure yet whether Shirock will win the UK crowd over here with their stadium sized gestured pop rock sounds as we tend to be a little understated and ever so slightly cynical on these shores.

However, there’s no doubt that Shirock have an ear for a huge radio friendly sing-a-long number and melodies that will make you feel as though you’re soaring through the skies along with them.
Review by Rémy Etienne