Not many bands that have played the Vans Warped Tour claim the Beatles and Beach Boys as their musical idols.

Sherwood, an indie quintet from San Luis Obispo, CA, fit neatly alongside the pop-punk likes of Yellowcard and other post-Green Day acts, but with an unapologetic power pop side that gives them a distinctly melodic edge.

Taking their name from an early band joke about writing a concept album that meshes with the 1973 Disney Robin Hood cartoon in the way that Pink Floyd’s The Dark Side of the Moon supposedly meshes with The Wizard of Oz, Sherwood formed in late 2002 while its members were students at Cal Poly State University.

The band’s self-released debut, 2004’s The Summer EP, and an opening slot on the Vans Warped Tour that summer caught the attention of pop-punk label SideCho Records, which signed the band later that year. Sherwood’s full-length debut album, Sing, But Keep Going, was released in May 2005.

Touring came next, of course, and the guys logged time throughout the year with bands like This Providence, Tokyo Rose, and Daphne Loves Derby.

Armstrong exited in early 2006 to return to school, as the band’s profile steadily grew thanks to the support of popular news blog, AbsolutePunk.net. Sherwood (now a quartet) eventually inked a new deal with MySpace Records that fall and released Different Light in March 2007.
myspace.com/sherwood 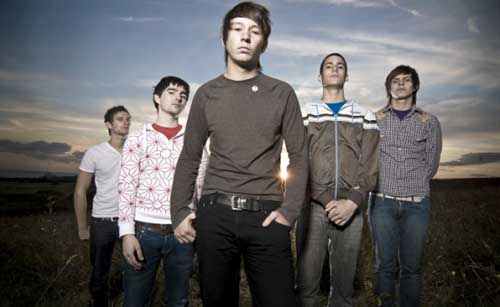 Kill The Arcade signed to Tree Brain Records home of Tonight Is Goodbye, Mimi Soya and Jaimison after gathering a strong live and MySpace following.

They are now very much looking forward to their first release.

We write dark stories and tell them through pop music, claims front man Lee Newell. Our debut EP is a collection of songs all based around the subject of betrayal.

There are references to imprisonment, murder, debauchery, lying and greed. And we like to play out these stories through music people can understand.

We’re so excited about the future. We just feel that it’s a matter of time before people take notice of what we’re doing, and really get into it. I think everyone can take what they want from our music.

They can sing-a-long to the hooks, or look deeper at the stories. We want Kill The Arcade to be a positive part of people’s lives.
myspace.com/killthearcade
The Red Jumpsuit Apparatus to get their music across in Belfast
RED JUMPSUIT APPARATUS
Sherwood / Kill The Arcade
NEXT WEDNESDAY 21st MAY
AUNTIE ANNIES
TICKETS: £8.00 (Limited Tickets Available)
DOORS: 9:00pm
Tickets on sale from Katy Daly’s, Zavvi & all usual Ticketmaster outlets. Credit card bookings & info: 0870 2434455 or book online at geturticket.com / www.ticketmaster.ie