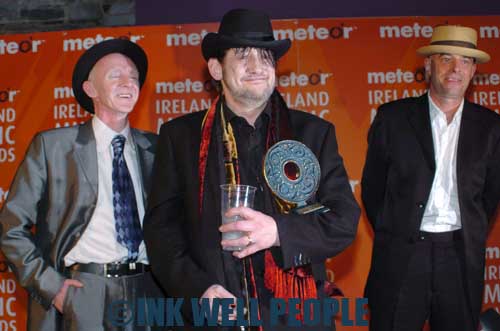 Photo by Fabrizio Belluschi
Itâ€™s the biggest Christmas party in the country! Back together to celebrate their 25th anniversary, Shane MacGowan and the Pogues today announce a gig in Belfastâ€™s Nugent Hall on Saturday 22nd December. Donâ€™t miss the chance to hear a quarter century of legendary hits (including Fairytale Of New York, The Irish Rover and Dirty Old Town) in one night!

THE POGUES:
It was Christmas Eve, babe, in the drunk tank…

Actually, it was in the evening of October 2, 1982 at The Pindar Of Wakefield pub in London, England. A band, curiously named Pogue Mahone (a Gaelic term meaning Kiss My Arse), came on stage to play their first gig. Nobody could have expected that this would be the beginning of an odyssey which would change the music scene, rejuvenate a nationâ€™s musical heritage, and and bring joy to generations of fans.

Their blending of inspired original writing, Irish music tradition and punk attitude, ethos & speed (â€œplaying at 900 miles an hourâ€) made an exciting new sound with a global appeal. Their popularity grew and with it demands for their music on the radio.

Once the meaning of their name became known to the BBC, the Guardians of Morality demanded that the name be changed. It was shortened to The Pogues, and their fame (and infamy) grew. Their wild gigs became legendary. Their raw energy combined with evocative lyrics struck the right chord with audiences and earned The Pogues a loyal following.

After a rapid rise to stardom in the 1980s, five critically acclaimed albums, and a nearly constant touring schedule, the band began to suffer from the stress and pressure. Founding member and main writer of The Pogues, Shane MacGowan, parted with them in 1991.

The band continued on, releasing two additional albums and adjusting to continued changes in lineup. The band finally split in 1996, and it looked like the end of Pogue Mahone. However, the new millenium saw a reunited Pogues performing to sold-out venues, a band enjoying working together again and thrilling fans (old & new) worldwide.

Still rocking after all these years! Hereâ€™s to the 25th anniversary of The Pogues, and to many more years of Poguetry!