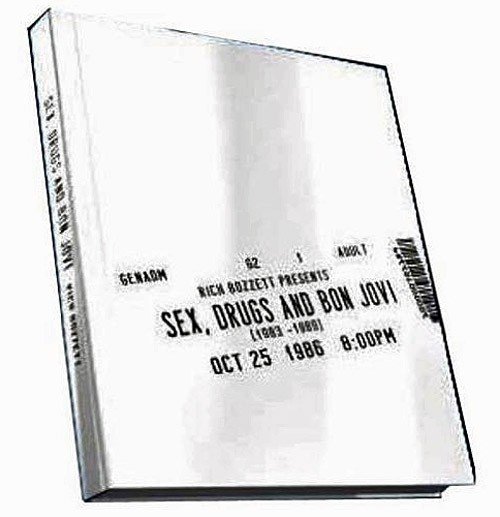 Now, former Bon Jovi tour manager, Richard Bozzett guides us through his years on the road with one of the world’s most iconic bands, with stories Bon Jovi hoped to keep under wraps.

“Jon Bon Jovi has publicly condemned the book and has criticized me in the media because I know a lot about Jon and the band that he would prefer to leave in his past.”

From the early days with the unknown boys from Sayreville, to huge worldwide tours, Bozzett takes us on his own guided tour through Bon Jovi’s unrevealed early years and rise as only he can tell it, including:

* Rare stories and photographs of the band’s life of excess on the road.
* Details of the band’s racy, never-published photo shoot.
* The secret of the drug ring funding the band’s management behind-the-scenes.
* A look at two childhood friends traveling the same road as tour managers, both working for drug-funded Mcghee Entertainment, one with Bon Jovi and the other with Motley Crue. After both left the business, one returned to a normal life and the other couldn’t.

“Bon Jovi fans deserve an inside look into the band’s early years,” Bozzett explains. “Working and living with the band on the road from 1983 through 1989, I was there for every moment, and want to share it with the fans.”

“Our inner circle was like a family,” he adds, giving readers an in-depth look inside the little-seen early years of life with Bon Jovi, both on and off the stage, including hundreds of never-before-published personal photographs.

Bozzett’s childhood friend and former Motley Crue tour manager, Richie Fisher, attempted to end his life by jumping to his death from the Waldorf Astoria hotel.

“That was the moment when I realized tour managers and road crews give their all to the job without basic benefits like health insurance, job security, or provisions for the future. After being unceremoniously let go without anything to show for my years of hard work for Bon Jovi, I was lucky enough to persevere and find my way,” said Bozzett.

He continues: “Richie was not that lucky. I wrote this book to create the Unsung Heroes Foundation which will provide basic resources like health insurance and a 24 hour support hotline for anyone working on the road and dealing with the 24/7 demands of touring, or at home trying to get back to work.”

Sex, Drugs, and Bon Jovi is available at Sexdrugsbonjovi.com, Amazon.com, Getbonjovi.com, and Barnesandnoble.com.