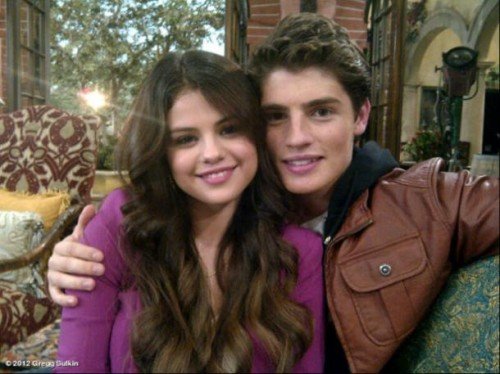 First Justin Bieber tweets that moody black and white photo of him with the caption “Lingse” that told us the following: Justin is a deep, thoughtful artist with an anagram app installed in his iPhone…WHO MIGHT BE SINGLE.

“Lingse” is “Single” rearranged, it is also the coveted key that unlocked the door to a glimpse of YOUR potential future of being the next Ms. Biebs because maybe the “Boyfriend” singer is insinuating he and Selena may have broken up and you’re suffocating from holding your breath ever since just thinking about it?!

Then there was the picture that nearly sent you into an asphyxiation induced daze.

J.B.’s GF Selena Gomez is back on set with co-star Gregg Sulkin where the two took that cuter than Mickey and Minnie Mouse holding hands snapshot together as they reunited (and it feels so good?) for the Wizards of Waverly Place movie that kicked the door open even further on your chances with Bieber—only to quickly and loudly be shut closed again.

“They are just friends, no romance,” a rep for Selena tells Hollyscoop. “They have known each other since he was 16.”

Turns out their on screen chemistry isn’t translating into their love lives.

The two are just appearing in a Wizards of Waverly Place reunion movie where Gregg will also step back into his role as Mason for an hour-long special of “Waverly” airing in 2013.
By Matt Dekneef
READ MORE hollyscoop.com