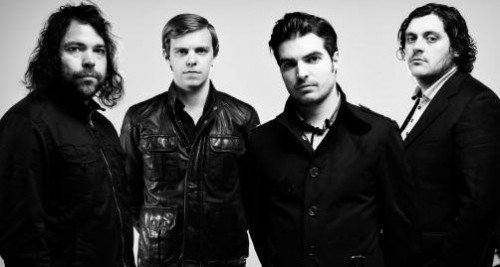 London-based quartet The Boxer Rebellion have made their mark on the world via 3 breathtaking albums and an epic musical journey that is anything but ordinary.Having self-released and virtually self-financed the follow-up to their debut Exits, the band’s Union LP was declared Alternative Album of the Year.

2009 saw The Boxer Rebellion make history by becoming the first unsigned band to enter the US Billboard 100 Albums Chart on digital sales alone.

In 2010 they appeared in a major Hollywood movie, and their current album, the Ethan Johns produced The Cold Still, is their most accomplished and celebrated work to date.

More pop-up sessions will be taking place in London throughout in August, hosted by Black Cab Sessions in association with Last.fm. The live sessions pick up on the essence of HP’s Beats technology by giving fans the chance to hear music exactly as the artist intended from artists handpicked by Last.fm, the leading music discovery service.

Alongside the live music activations, HP will be giving its Facebook community access to exclusive content captured by Last.fm at some of the summer’s most popular music events. With access to some of the most hyped musicians of the moment, Last.fm and HP will interview these artists around the Power of Sound in their lives and will also be taking questions from the HP Facebook community to discover the influences behind their music and what drives their passion to write and perform.
facebook.com/HPUK
Twitter: @HPUK