Emmerdale’s Woolpack was rocking this morning when indie trio Scouting for Girls played a live acoustic session from the set of the infamous village pub.

The bandâ€™s drummer, Pete Ellard, is a self – confessed Emmerdale super-fan and his dreams came true this morning when he and fellow band members Roy Stride and Greg Churchouse were granted exclusive access to the soapâ€™s Woolpack set to play a live gig. 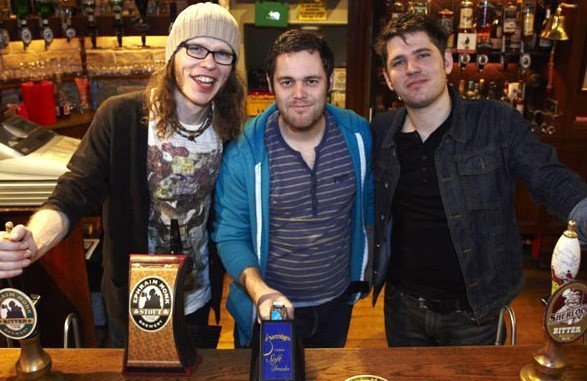 Frontman Roy Stride said; “We’re here promoting our new album Everybody Wants to be on TV and our new single which was actually played on Emmerdale last night!”

Bassist Greg Churchouse added; “Performing in the Woolpack is one of those life experiences you could never replicate. Pete is a massive fan so he will never forget this!”

The band were joined by cast members James Thornton and Natalie J Robb as they played three tracks including hits ‘She’s So Lovely’, ‘Heartbeat’ and their latest single ‘This Aint a Love Song’. The session went out live on JK & Joel’s Radio Aire Breakfast Show as part of Emmerdale take-over week to promote voting at the British Soap Awards. As the they finished their set, the group burst into a chorus of “vote for Emmerdale” to the tune of their hit single ‘She’s So Lovely’ . 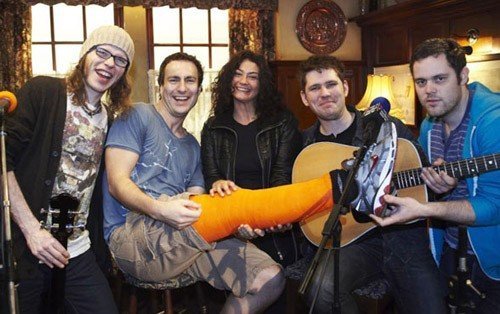 Everybody Wants to be on TV is the title of Scouting for Girls’ new album and Emmerdale fan Pete hopes Producer Gavin Blyth might just be able to make that happen “We’ve had a little chat with the producer already this morning!”.

Pete joked “we could have Roy and Edna in a love triangle”. Front man Roy added ” It’d be TV gold, let’s make it happen.” We’ll have to wait and see whether the trio will actually descend on the dales but Gavin teased, ” We’d love to get the boys a storyline in Emmerdale.”

Exclusive footage of Scouting for Girls at Emmerdale will be available on ITV.com/Emmerdale.
www.myspace.com/scoutingforgirls