After an electrifying performance on the Main Stage at last weekends Oxegen festival, Scouting For Girls will return for an end of year party to Belfastâ€™s St George Market on Monday 15th December.The trioâ€™s debut album has achieved platinum status in the UK and Ireland with their infectious brand of indie pop and catchy anthems such as Elvis Aint Dead, Heartbeat and their debut single Sheâ€™s So Lovely.
Formed in 2005 by frontman Roy Stride, Scouting For Girls are a living testament to maintaining visitation rights to your inner child. The band is largely made up of friends he has known for years. Bassist Greg Churchouse was the schoolmate with whom Roy first started playing music with at age of 11. 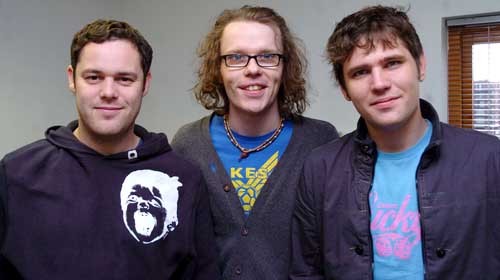 Photo by Â©Fabrizio Belluschi/Ink Well People
Drummer Peter Ellard meanwhile, having had Roy as his â€˜sixerâ€™ in junior school, has known him even longer. During their college years all three played with the band Cape but it wasnâ€™t until Roy left to form Scouting For Girls and taking most of Cape with him he found himself writing two tunes a day, all vibrant, buoyant piano-pop evocations of youth and young manhood; the girls ( â€˜Come see me, discreetly, she says she’s got a trick or two to teach me!â€™ goes â€˜Sheâ€™s So Lovelyâ€™ ), playful wit ( â€˜Elvis Aint Deadâ€™ is a tale of a frustrated paramour hoping his lover will return to him, inspired by the anythingâ€™s-possible attitude of the Elvis Is Alive theorists ) and cloud-gazing dreams ( â€˜James Bondâ€™ is about drummer Peteâ€™s belief that he would one day be the new 007 ) of childhood.

Scouting For Girls started their own club night in an above-pub club in Harrow where they would put on cheap club nights showing films, giving out sweets and playing shows alongside a bunch of like minded bands. With the mighty power of Myspace, word of the band spread and people came from across the UK to join the party, many becoming fully fledged members of the Wolf Club â€“ Scouting For Girls own club style organization. Currently boasting over 2000 members, membership to the Wolf Club gets you a free CD, a membership card, a badge and a booklet including first aid tips, campfire songs, a reprinting of Oscar Wildeâ€™s â€˜The Happy Princeâ€™, medical advice for healing a broken heart, and a secret code to use in sending coded messages to other members.

Truth told, the whirlwind has barely begun. Scouting For Girls; be prepared.

Scouting For Girls new single â€˜Its Not About Youâ€™ will be released in August.