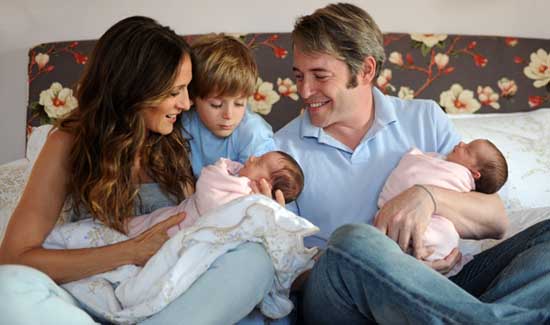 The girls, Marion Loretta Elwell Broderick and Tabitha Hodge Broderick, were born last week to a surrogate at the East Ohio Regional Hospital in the United States. A statement released at the time said “the babies are doing beautifully and the entire family is over the moon.”

The couple were married and 1997 and have a son, James Wilkie, aged six. He also features in the family portrait. In it Sarah Jessica, 44, holds baby Marion and Matthew, 47, holds baby Tabitha.

Parker, 44, is expected to begin work on a sequel to the Sex and the City movie later this year. Broderick, 47, is best known for his lead role in the comic film Ferris Bueller’s Day Off.

The middle names of the baby girls are family names on the actress’s side, according to the couple’s publicist.