When your debut single is number one in seven different countries and your album goes on to sell more than 700,000 copies, you get to choose where you record the follow-up. And having made her first album on a miniscule budget in a freezing barn in Cheshire, you might think Sandi Thom would want to go a bit more upmarket this time.

But Sandi tends to do things her own way, no matter how unconventional that may be. Which is why she recorded the whole of her second album, â€˜The Pink & The Lilyâ€™ in the basement of her flat in Tooting.

â€œI like my own surroundings,â€ she smiles. â€œAnd I like being in control. For me itâ€™s about being comfortable, being able to relax and not be intimidated. In fact I probably did most of my vocals in my pyjamas â€“ Iâ€™d get out of bed, make a cup of tea, go downstairs and just do it! And it was great having that freedom.â€ 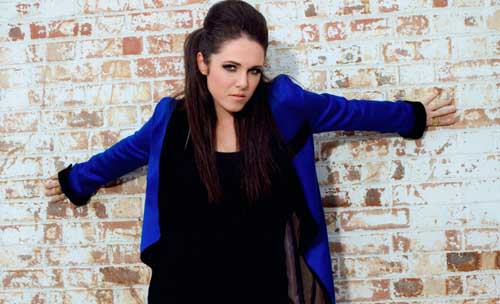 Sandi famously came to the worldâ€™s attention in that same tiny basement with her â€˜21 nights in Tootingâ€™ tour â€“ three weeks of concerts that she sent out to audiences worldwide via the Internet. Her first single had already been released via the small independent label Viking Legacy and she had an album ready to go, but suddenly the media picked up on her story and all the majors were queuing up in her kitchen to sign her. And when â€˜I Wish I Was A Punk Rockerâ€™ was re-released on her new label RCA, it went straight to number one in the UK and went on to be a hit world-wide. In Australia alone, it topped the charts for a record-breaking 12 weeks.

Sung mainly a capella with just handclaps and the most basic percussion behind her, the song was one of the stand-out tracks of 2006, showcasing Sandiâ€™s strong, soulful voice and establishing her as a major new songwriting talent. The album that followed proved that she was no one-hit wonder. â€˜Smile.. It Confuses Peopleâ€™ has the same raw, rootsy feel, is packed with strong songs, and also shows her to be an accomplished musician.

Sandi may only be 26, but sheâ€™s been playing live for more than 12 years and her route to overnight success was a long one. She grew up in Macduff, a little fishing village on the north-east coast of Scotland, where her aunt Nelly started teaching her piano at the age of four. By the time she was 14 she was performing in a covers band called The Residents, travelling to bars, weddings and parties in a smelly van borrowed from a local fishing company. 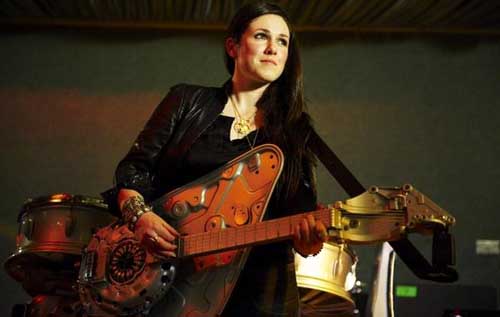 Four years later she went to study at the Liverpool Institute for the Performing Arts, and it was here that she met her tour manager Lizzie Brown, guitarist Marcus Bonfanti, and her percussionist Craig Connet. In the years that followed, she sang in a gospel choir, formed a variety of bands, landed a publishing deal, wrote hundreds of songs, and worked as a session singer â€“ which is how she met her producers Jake Field and Duncan Thompson.

It says a lot about Sandi that all of those people are still with her now. And when it came to making a second album, she decided to stick with what she knew, using the same band, same producers â€“ and recording in the basement that has served them as a rehearsal room ever since she moved down to London.

â€œThere are so many memories there,â€ she explains. â€œAnd because some of the songs are about the last year, it gave me inspiration just to be standing there, singing these songs and thinking about all the stuff thatâ€™s gone on in that room. It all made sense.â€

In the past year sheâ€™s played some spectacular shows, performing in front of 35,000 people as support to George Michael, pulling crowds of up to 25,000 to a series of gigs around France, appearing at the V Festival (where she wrote the melody to â€˜The Pink & The Lilyâ€™ in the back of her van just before going on stage) and the Fuji Festival in Japan as well as headlining shows across Europe in her own right.

â€œIâ€™m a live musician, and Iâ€™ll play my arse off,â€ she smiles. â€œThatâ€™s what I love doing. Iâ€™ve never not enjoyed a gig. Itâ€™s such a joy to be able to go out of the road with your best friends and play to an audience.â€

Still, it was perhaps inevitable that some of these experiences would filter into the new songs. The albumâ€™s most full-on rock track â€˜Shape Iâ€™m Inâ€™ is about pulling yourself together to give a good show no matter how bad you feel, while the celebratory â€˜Thereâ€™s Only One Saturday Night In Every Weekâ€™ stemmed from her manager warning her, when she was partying perhaps a little too hard on the tour bus, that thereâ€™s only one Saturday night in the week.

But ironically for someone who first came to the worldâ€™s attention through her concerts in cyberspace, many of the songs on â€˜The Pink & The Lilyâ€™ are drenched in nostalgia, a longing for warmer, easier times when things seemed less complicated. Sandiâ€™s parents split up when she was six; her stepfather left ten years later, and whenever there were rows in the family home, she cast herself in the role of the diplomat, the one who calmed things down. â€œI had to grow up fast, and it was hard at times. I think thatâ€™s why I like to think back to more innocent times. Itâ€™s almost like living in a fantasy world, a perfect, â€˜Happy Daysâ€™ version of the past.â€

She sings about the golden age of movies (the lush, cinematic ballad â€˜The Last Picture House in Townâ€™), looks back at her own childhood (â€˜They Donâ€™t Make Mirrors Like They Used Toâ€™), and decries modern menaces like bad TV (the jaunty, vintage rockâ€™nâ€™roll of â€˜Remote Control Meâ€™), the corporate career path (the Celtic folk-tinged â€˜Successâ€™s Ladderâ€™), or global warming (the New Orleans/zydeco influenced â€˜Devilâ€™s Beatâ€™). She has also included one of her most personal songs to date, the country-soul ballad â€˜Wounded Heartâ€™ â€“ a tribute to her boyfriend and collaborator Jake Field.

â€œIâ€™ve been with Jake for two years now, and itâ€™s the only time Iâ€™ve ever been in a relationship I felt could actually go somewhere. I can be very guarded at times â€“ Iâ€™m one of those typical people who have been hurt in the past, and are now afraid of committing because you donâ€™t want to get hurt again. Itâ€™s the old predicament. And itâ€™s the only song on the album thatâ€™s entirely about me.â€

Sandi is also staunchly traditional, even old-fashioned in her attitude to her music, putting herself firmly into the line of female singer-songwriters that stretches from Joni Mitchell and Chrissie Hynde, through to Sheryl Crow and Alanis Morissette. Musicians with integrity. She says, â€œFor me itâ€™s always about the music first, writing the songs and then delivering them to people.â€

The new songs are layered, complex, full of lush strings, real horns, interesting new sounds and unpronouncable percussion instruments, but they still retain the same raw, emotionally direct feel. The achingly beautiful torch song â€˜Ungrateful Heartâ€™ was, for instance, recorded in just one take. â€œI was really hung over that day, but it was alright because I was in my own house. So I just sat on a chair, falling asleep and just sang it. For me it was one of the best things Iâ€™d ever done, even if it was a bit husky or whatever, just because I was so relaxed.â€

And the title? It comes from a pub in Buckinghamshire that was named The Pink & The Lily by the son of the original owners when he took over as landlord in 1833. Mr Pink and Miss Lillie had been the butler and chambermaid in a great house owned by the local Hampden family, but were sacked when it was discovered they had scandalously conceived a child outside of wedlock. Undeterred, the couple set up their own pub and happily raised their child there, who then became the first landlord of what is now affectionally referred to as â€˜The Pinkâ€™; an unconventional love story that Sandi found inspiring.

â€œItâ€™s a really beautiful, romantic little story about how they just went off and lived their life together regardless of what people thought. They were in love, and thatâ€™s all that mattered. I related to it, in some way. Calling the song and the album â€˜The Pink & The Lilyâ€™ is my way of saying, â€˜Follow your heart and not what people tell you to do.â€™
sandithom.com
myspace.com/sandithom
SANDI THOM
Plus Support
WEDNESDAY 11th JUNE
THE LIMELIGHT
TICKETS: Â£9.00
DOORS: 9pm
Tickets on sale from Katy Dalyâ€™s, Zavvi & all usual Ticketmaster outlets. Credit card bookings & info: 0870 2434455 or book online at getURticket.com/ ticketmaster.ie