Ryan Bingham knows a thing or two about pain. He learned the emotional aspect early in life, when shuttling between small towns and family members in the hardscrabble ranching communities of West Texas and New Mexico — and became well-acquainted with the physical facets during his years on the Southwestern rodeo circuit. 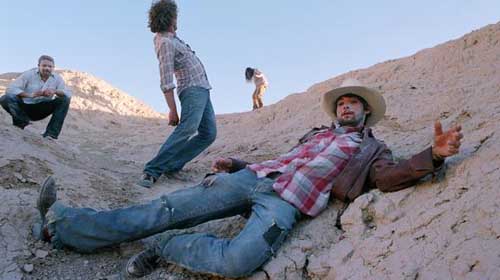 That ache is palpable in the grooves of Mescalito, Ryan Binghamâ€™s Lost Highway debut, but whatâ€™s even more plain is the steely strength needed to overcome it — a tenor thatâ€™s evident in both the singer-songwriterâ€™s preternaturally wizened voice and his remarkably poignant songs, which resonate with roadhouse wisdom and rough-and-ready border-town piquancy.

â€œI first started playing music when I was about 17 years old and living down on the border of Mexico,â€ he recalls. â€œMy mom had bought me a guitar when I was a kid and I never did play it very much, but I always had it hanging around. There was this guy who lived next door and played mariachi music. I was fascinated, and mostly Iâ€™d go over and drink whiskey with him and watch, but then he taught me some chords and he hooked me. I havenâ€™t put it down since.â€

Thatâ€™s evident throughout Mescalito, from the Rolling Stones-flavored blues strutting of â€œTake It Easy Mamaâ€ to the deceptively gentle finger-picking that runs through the wistful â€œDonâ€™t You Wait For Me.â€ Aided by the sympathetic production of Marc Ford — perhaps best-known for unspooling the sturdy rhythm guitar lines that powered the Black Crowes on their classic â€˜90s albums — Bingham manages to kick both the heart and the hips into high gear.

â€œI grew up listening pretty much only to the older stuff,â€ says the 25-year-old. â€œMy family had a ranch between Hobbs and Carlsbad, and on the side my uncle had a bar called The Halfway Bar, and Iâ€™d listen to all these old records from the 60s and 70s on the jukebox there. I lived with him for a while when I was little, and all he did was listen to those old records — Bob Dylan, Bob Wills, Marshall Tucker. I never related to anything that was on the radio when I was a kid back in the â€˜90s.â€

That affection for tradition is evident throughout Mescalito, an album that finds Bingham digging deep into raw-boned country (on the just-jawed workingmanâ€™s ode â€œDollar a Dayâ€) and revisiting his border-town upbringing (on the lilting, Spanish-language mariachi track â€œBorachoâ€™s Stationâ€). But nowhere on the album does Bingham come across as the sort of guy prone to living in the past. He can pay tribute to his heroes — â€œTravelinâ€™ Jonesâ€ is a nod to Luckenbach, TX legend Greg Gorman, who passed away in late 2003 — but ultimately, every note on the 14-song disc is an expression of Binghamâ€™s unusually full life, both the good and the bad.

â€œWe lived in so many different towns and even when we stayed in one town, weâ€™d move to different houses,â€ recalls Bingham. â€œSomething would happen, the bills wouldnâ€™t get paid and weâ€™d get evicted. After a while, Iâ€™d get to where I wouldnâ€™t even unpack my stuff. My parents were great people, but they lost control, lost their grip on the world and went spiraling down and crashed. Me and my sister either had to go down with â€˜em or we had to get up on our own feet and make our own way.â€

Those arenâ€™t just idle words. Bingham has been living largely on his own since his mid-teens, an existence he facilitated by — as he puts it — â€œdriving all night to ride a bull whoâ€™ll knock your teeth out on every jump, then sleeping in back of your truck in a dusty arena.â€

It was while on these cross-state treks that Bingham, whoâ€™d often take out his acoustic guitar to entertain friends, got his first taste of performing for strangers. He remembers â€œ[going] into a bar in Stephenville, Texas, where a bunch of friends asked me to play a couple songs for them. I went out and got my guitar and the owner said â€˜you oughta come on in and play now and then.â€™ So I did — I started playing every Wednesday night and people started showing up to hear me play — it was pretty much an accident, I guess.â€

That success led Bingham to put some of his growing backlog of compositions on tape — which led to the release of such self-released, no-budget CDs as 2005â€™s Wishbone Saloon. The tunes contained on those fueled many a barroom jukebox and earned the attention of folks like Texas legend Terry Allen (who dubbed him â€œthe legitimate heir to the hard traveling deep knowing likes of Woody Guthrie and Hank Williamsâ€) and Joe Ely (who marveled that â€œhis stories plant an uppercut to the gut and give a hint that truth is on the run.â€).

Bingham shrugs off such praise, assessing his own work in the matter-of-fact fashion one might expect from a guy who cut his teeth hanging with, and sometimes brawling with blue-collar folks for whom cowboy hats are no mere affectation.

â€œTo me, making music is like having a conversation with someone,â€ he says. â€œI met some guys who talk about the same sort of stuff that I do, and you can tell when somebody has lived it and when they havenâ€™t. Itâ€™s not hard to tell when a guy is full of crap, man.â€

Heâ€™s full of stories — both knee-slapping and white-knuckled — and heâ€™s undeniably full of soulfulness. But as Mescalito proves, no one will ever accuse Ryan Bingham of being full of crap.
myspace.com/ryanbingham