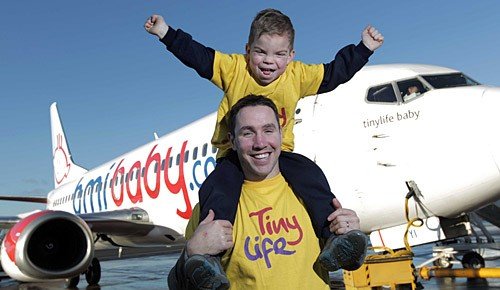 The Ulster and Ireland rugby star took a break from his vigorous training schedule to unveil a bmibaby aircraft named â€˜TinyLife, babyâ€™ with the help of bmibaby cabin manager Rachel Harding and five year old Ryan Beggs from Belfast who was cared for by the charity when he was born ten weeks premature.

As part of the TinyLife Big Difference Day, bmibaby will also roll out an action packed fundraising schedule giving Northern Irelandâ€™s only premature and vulnerable baby charity the opportunity to fundraise at George Best Belfast City Airport and onboard bmibaby flights to and from Belfast City to Birmingham and East Midlands Airport. 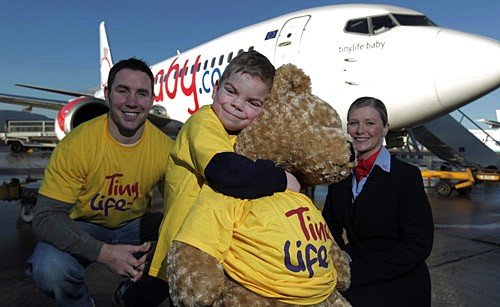 Paddy Wallace said:
â€œItâ€™s great to take time out to support TinyLife. I have been a patron for five years now and have seen the great work the charity does both from a personal and professional perspective. Itâ€™s fantastic that bmibaby can support the charity like this as it means more sick babies and their families can benefit from TinyLife services.â€

Julian Carr, managing director, bmibaby, added:
â€œOut of 25,575 babies born in Northern Ireland last year 1,800 were born prematurely. As part of our ongoing support for the charity, we wanted to dedicate a day to fundraising in a bid to make a difference to the local families and babies they support.

â€œAs well as welcoming TinyLife fundraisers onboard a range of flights on Big Difference day, our spokesbaby, Tiny will be at Belfast City Airport to help the charity with their collections on the ground.â€
www.tinylife.org.uk
www.bmibaby.com