By Keith Bailie
ROYAL Mail are celebrating the 50th anniversary of the Carry On and Hammer films by releasing six cinematic stamps.

In 1958 Carry On Sergeant and Dracula were released, despite their shoestring budgets they went on to spawn a vast series of follow ups and imitators.

Julietta Edgar, Head of Special Stamps, Royal Mail said: “Carry On and Hammer Films had a huge impact on British audiences and around the world, and their influence and enduring appeal lives on today”.

The six stamps feature the original cinema posters and alternate between the two genres of comedy and horror.

The collection is available from June 10.
Here is FAME’s stamp by stamp guide to the Carry On and Hammer collection: 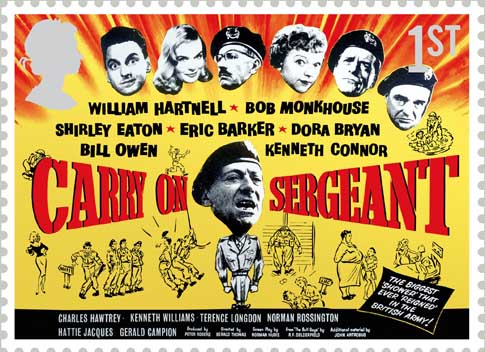 48p – Dracula
Released in 1958 and the first colour version of this classic vampire tale, Dracula starred Christopher Lee as the undead blood sucking count with Peter Cushing as his nemeses Van Helsing. 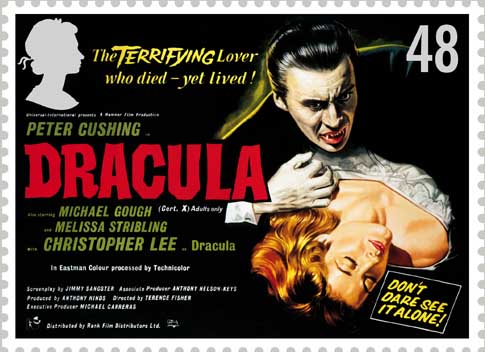 56p – The Curse of Frankenstein
Released in 1957, this retelling of Mary Shelley’s classic story was one of the first films to do so in full gory colour. Cushing played Victor Frankenstein while Lee was the creature.

72p – Carry On Screaming
A pastiche on the then popular Hammer Horrors Carry on Screaming follows the adventures of a pair of Victorian detectives (Harry H Corbet and Jim Dale) as they investigate a suspicious showroom dummy factory run by Fenella Fielding and Kenneth Williams.

81p – The Mummy
An Archaeologist (Cushing) is pursued by the Mummy of Kharis (Lee) avenging the desecration of the tomb of his lover who turns out to be the image of Cushing’s present day fianc played by Yvonne Furneux.