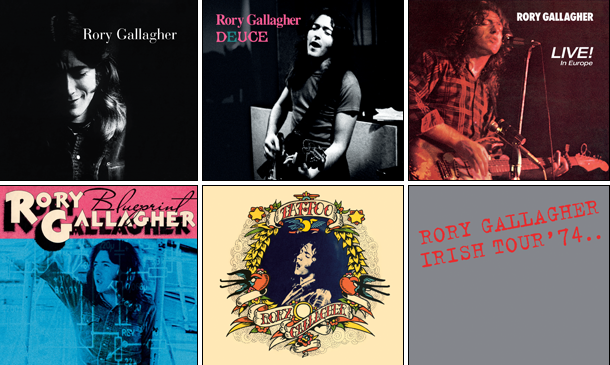 Sony Music in association with Capo Records and Legacy will re-issue the first six original Rory Gallagher albums in chronological release date order – “Rory Gallagher” (1971), “Deuce” (1971), “Live! In Europe” (1972), “Blueprint” (1973), “Tattoo” (1973) and “Irish Tour ’74” (1974). These six seminal re-issued albums celebrate 40 years since the birth of Rory’s solo career.
Rory Gallagher was a musician like no other. He was, and still is, one of the world’s greatest guitarists, singer/songwriters and live showmen.

His guitar playing is an inspiration to some of today’s hottest guitarists including Slash, Joe Bonamassa, Brian May, Johnny Marr, and The Edge.
Each of the six milestone albums were released during Rory’s most prolific years (1971-74), when he recorded and produced them in the short space of three years. The albums are re-released in digipack form, with newly restored original cover art.

The audio has been re-mastered from the original ¼” inch tapes, true to how Rory intended it to sound.