This is one of the highlights of Belfast summer calendar. During next week’s ‘Opera in the Gardens’ it will feature romance and intrigue.
For the sixth successive year of this event, the Belfast City Council has joined forces with the Royal Opera House and BP to transport Covent Garden to Botanic Gardens, which gives the local opera lovers an opportunity to enjoy a magical performance of one of the world’s favourite operas and it wont cost a penny.’Opera in the Gardens’, which will take place on Wednesday 16 July, will watch Mozart’s classic comic opera, ‘The Marriage of Figaro’, broadcast through satellite from the Royal Opera House in London to a giant screen on the Great Lawn at Botanic Gardens. 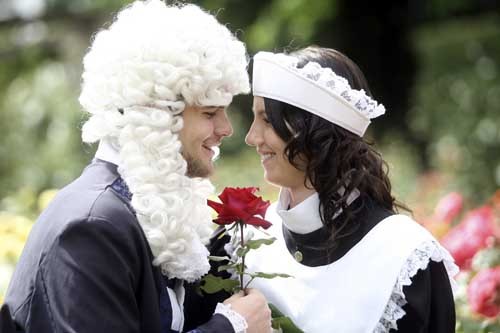 In this year’s Opera, it provides a perfect complement to one of Belfast’s other hugely popular annual events, Rose Week, which takes place at Sir Thomas and Lady Dixon Park from Monday 14 July.

‘The Marriage of Figaro’ has delighted audiences for centuries and remains just as entertaining today as when it was first performed back in 1786.

Figaro is on the verge of marrying one of his fellow servant Susannah, but his boss, Count Bartolo, is trying his luck with his fiancÃ©e, whilst the scheming Cherubino is making advances on the Countess Marcellina, who desperately is trying to save her marriage, with the help of both Figaro and Susannah. And, it doesn’t stop there: a lawyer turns up to take Figaro to task on an earlier promise of marriage.

Forget about love triangles: this is more of a love circle, as ‘The Marriage of Figaro’ unfolds into a hilarious tale of class struggle and infidelity. Banned in France because of the apparent supremacy of the two servants over their aristocratic masters, it is action-packed yet both comic and poignant.

In this production, Figaro is played by the Italian bass-baritone, Ildebrando D’Arcangelo, and Susannah by the Polish soprano, Aleksandra Kurza. The role of Count Bartolo is performed by the distinguished bass, Robert Lloyd, while the highly-acclaimed Dublin-born mezzo soprano Ann Murray portrays the Countess Marcellina. In the best theatrical tradition of young male characters being performed by women, the scheming Cherubino is played by the French mezzo soprano, Sophie Koch.

Gates will be open at 5pm, with entertainment starting on the Great Lawn around 5.45pm. This year’s programme will open up with a live performance from John Anderson’s ‘Voices of Ireland’, returning to Botanic Gardens after their successful appearance last year at this event.

‘Voices of Ireland’ features great soloists artisits and a superb choir, and their repertoire of familiar songs includes the music of Van “the Man” Morrison, Enya, Brian Kennedy and more.

The main performance, relayed from Covent Garden, starts at 7pm. The performance is also being simultaneously screened across the UK which inculdes the Covent Garden Piazza and Trafalgar Square, Canary Wharf, Sunbury, Aberdeen, Victoria Square, Birmingham, Liverpool and Thurrock.

Admission into watch ‘Opera In The Gardens’ is free but is limitied to first-come-first-served basis so try to get there at a earlier time. Entrance to Botanic Gardens at either the main Stranmillis Road gates, the Stranmillis Embankment (beside Queen’s PEC) or College Park (behind Queen’s University).

There will be bar and food facilities available on site. Picnics are permitted: however, in the interests of safety, patrons are asked not to bring barbecues, flaming torches, cans or glass, as you will not be permitted on site. No pets of any kind, except guide dogs. No bicycles are not allowed on site. Children under 16 must be accompanied by an adult at all times. Umbrellas may be permitted, but their use may be restricted.

Full terms and conditions of entry will be displayed at the site entrances.
Botanic Gardens will be closed at 10am on the day of the performance, with the three entrance gates re-opening at 5pm for the show, which is due to finish around 10.35pm.

Further information is available on the Belfast City Council website, at belfastcity.gov.uk/events , or from the Belfast Welcome Centre on (028) 9024 6609.
By Sean Russell
Â©Ink Well People